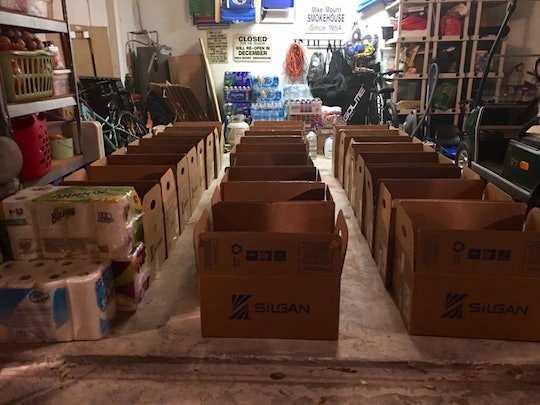 In the wake of a tragedy, one of the hardest things to do is to feel normal and get back into a routine. Especially when your home, school, or workplace have been totally destroyed. While rescue and relief workers still work towards rebuilding the devastation in the Florida Keys, this mom collected Halloween costume donations for Hurricane Irma victims and it's sort of the greatest story. Krystal Langley is a mom and second grade teacher who decided to start her very own relief organization for victims in her area.

Langley lives in Coconut Creek, Florida, but was raised in Marathon, which was hit very hard by Irma, according to HuffPost. Once things settled down after the initial hit of the hurricane, she started MM50 Relief Project, or the Mile Marker 50 Relief Project, and enlisted some Marathon High School grads like herself to help run it. They began by collecting all kinds of donations for hurricane relief. But then Langley started thinking about the annual fall festival, to which kids normally dress in costumes.

She realized that not everyone was going to be able to buy or DIY a Halloween costume like they normally would, according to HuffPost. So she put out the call for donations. Now, as she shared photos of on social media, she has a garage full of lightly used and new Halloween costumes for kids.

According to HuffPost, Langley found another mom, Ashley Keeney, who was on Target's Facebook page asking for candy and donations for the Stanley Switlik Elementary School's fall festivities. Langley reached out to her and now they're coordinating to the annual fall festival at Marathon elementary school on Oct. 22. As HuffPost reported, the two women are still coordinating how they'll distribute the costumes, but they hope to give them to kids for the festival and then let them keep them for trick-or-treating on Halloween.

It might sound silly when the Florida Keys are still largely devastated by Hurricane Irma, but making sure that the elementary school kids still have their holiday is actually very important. Establishing a routine for younger kids is a key component in recovering as it helps instill a sense of safety and security, according to CNN. A fall festival and costume parade that they'd normally attend? That sounds perfect.

Keeney told HuffPost, "There are several [kids] who have been displaced from their homes, some who I believe are living in hotel rooms, some that are living with friends or family." In fact, in September, an estimated 10,000 to 15,000 homes were "destroyed or left uninhabitable after Irma tore though the island chain and left thousands homeless," according to the Miami Herald. So, their efforts will certainly not be wasted.

Other foundations, like the Cajun Relief Fund, which is a citizen relief group, also reached out to them to lend a hand and drive donations up. It's pretty inspiring to see how people come together in the wake of a disaster to make sure their neighbors and neighbors' kids are holding it together. Most of the major agencies have left the Florida Keys, so it will be up to communities to help each other going forward.

Langley told HuffPost that she plans on keeping the relief fund for as long as it needs to be there. And it's not Irma specific — she's reportedly filed the paperwork to become a nonprofit and plans to make a website with a landing page for people to donate for the upcoming holiday season. Langley told HuffPost:

This will go on much longer than the rebuilding after Irma. If someone’s home burns down or they have some type of unforeseen circumstance, this relief project can reach out and help others and reach beyond the Keys once they’ve been rebuilt.

As for a starting point, collecting Halloween costumes to give kids a sense of normalcy during one of the most beloved childhood holidays is certainly a thoughtful and creative way to help communities rebuild themselves.