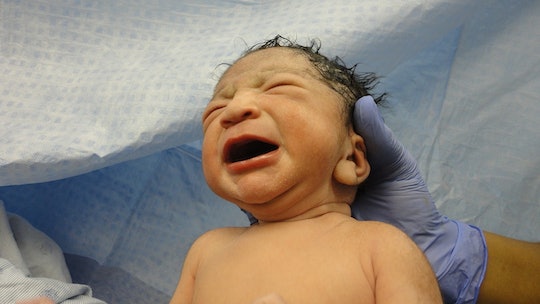 This Doctor Gave Birth & Delivered A Baby On The Same Day, What Did You Do Today?

The fact that so many moms grow another person inside of them and then push that little one out into the world makes them 100 percent certifiably badass. And one Kentucky mom took that to the next level recently when she delivered another woman's baby while she herself was in labor — a feat that was pretty much superhuman. But it was the natural thing to do for Amanda Hess, an OB/GYN who obviously goes above and beyond when it comes to caring about — and caring for — her patients, no matter what.

It all went down last week at Frankfort Regional Hospital in Kentucky. According to a Facebook post by Dr. Hala Sabry, who founded the nonprofit Physician Moms Group, of which Hess is a part, Hess was wearing a patient gown and preparing for her own induction when she learned that another woman was fully dilated and needed to give birth ASAP. The on-call physician was on his way, but the baby was "in distress," Sabry wrote — so Hess headed to the woman's room to take care of business like the boss that she is.

It was just another day at work — except it totally wasn't. Here's how Hess described the situation to CBS affiliate WKYT:

I love taking care of mothers and babies and really a lot of doctors are always thinking of their patients even when they're a patient themselves. ... I just put on another gown to cover up my backside and put on some boots over my shoes, to keep from getting any fluid and all that stuff on me...

And when Hess arrived to help the woman, Leah Halliday Johnson, she realized she she knew her. Although she was not exclusively Halliday Johnson's physician, she had seen her for a checkup just days prior. And partly because Hess was so professional, Halliday Johnson didn't even notice that she, too, was about to have a baby. "My husband noticed something was going on because she had on a hospital gown, but I didn't notice that because I was on the delivery table," she told NBC News after she welcomed her fourth child.

For Hess, the baby girl she herself delivered just hours later, Ellen Joyce, was her second. Not only will this be the absolutely best story for Hess to tell her daughter when she's a little older, but it really shows how much moms are capable of. Plus, Hess is girl power personified, as Halliday Johnson explained to NBC News:

I appreciate what she did for my family, and it speaks a lot to who she is as a woman and a mother as well as a doctor. It makes you feel better, bringing a baby girl into the world, knowing there are women like her willing to step up like that.

Congratulations to both the new moms!