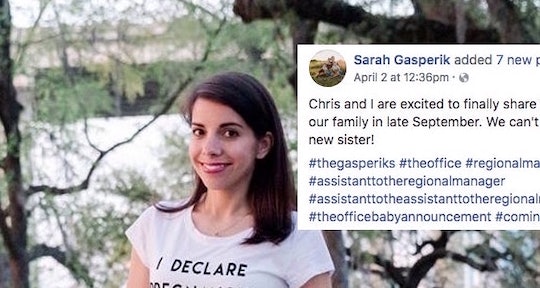 Watching The Office on repeat is basically a national past time and oddly, it really sticks with you. But you're going to be very jealous when you see this mom's The Office-themed pregnancy announcement for her third child and wonder why you and your partner didn't think of it first. As Dwight Shrute might say, it is Perfectenschlag.

Sarah Elaine Gasperik, 29 years old, and her husband Chris, 31 years old, are already parents to 3-year-old Lucas and Kai, 17 months old, according to BuzzFeed. And they're huge fans of the The Office. "It's on in my house right now," Gasperik told Romper when asked about the shoot. For their previous two kids' pregnancy announcements, they tried to keep things simple. Gasperik, a professional photographer, told Romper that for the first kid, they took a picture of their feet and an extra pair of baby shoes, along with the years they were born in chalk and the baby's due date.

"For our second son, I got my oldest a t-shirt that said 'Promoted to big brother and we just did a simple shoot with him inside. We used a white board and made it look like he had written 'I'm getting a little brother,'" she added.

"So, cute ideas, but nothing extreme and nothing original. I knew with this third — and probably last — I wanted to do something really exciting," Gasperik added. "Especially when we found out we were having a girl," she explained. So they got started doing some research.

Gasperik explained that when she told her husband, he was all in. She told Romper:

When I started searching on Pinterest for Office themed baby announcements, there was nothing at all, so I came up with all the ideas and picked which references I thought made the most sense. I was happy to see my ideas come to life! Plus, I got the shirts made locally and she nailed it.

Well, Gasperik made it her own:

Well, Chris also made it his own:

The cutest part might be the way that Gasperik and her husband incorporated their two sons into the announcement, but you have to be a huge TV nerd to get it. There was an episode once upon a time where Jim, who loves to prank his coworker, convinces Dwight that he needs to hold a contest to find an assistant.

Anyway, look at these cuties:

Just in case you're wondering if they made a typo on that white board, it's not. It's yet another amazing reference to Michael Scott's...genius. In an episode in which he's trying to get his boss on the line, he tells the secretary to have David Wallace call back "as ASAP as possible," as Know Your Meme rightfully points out. Remember?

The shoot rightfully caught people's attention. Gasperik told Romper, "The response has been crazy and amazing. I had a feeling it could go somewhat 'viral' [because] people love The Office and a pregnancy announcement like this hasn't been done before!" It will likely be no time before others start to be inspired by her idea. In fact, she's even selling the "I Declare Pregnancy!" shirts — designed by Kirsten Simpson, who you can find on Instagram @southern_fried_stitchin and on Facebook — on her website if you want one of your own to wear to announce to your friends and family this summer.

It seems like everyone wants to make their pregnancy announcement, sex reveal, or maternity shoot as epic as possible. But this shoot is going to be hard to beat.