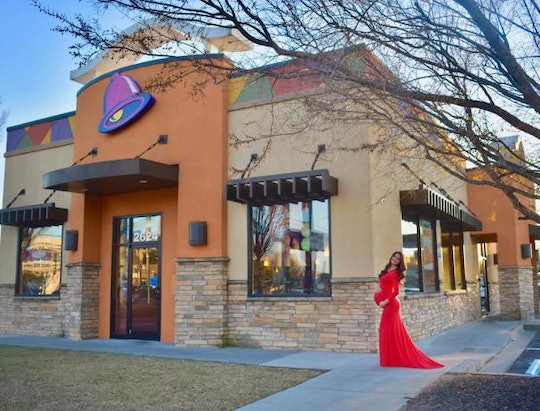 Like a lot of pregnant people, this mom in Atlanta had some serious pregnancy cravings. Chocolate, ice cream, and red meats are usually on the radar for moms-to-be, according to She Knows, but for Kristin Johnston, it was the fast Taco Bell's menu of Crunchwrap Supremes, beefy burritos, tacos, and Mexican pizza that was stuck on her mind for nine months (and pretty much forever). That's why this mom did her maternity shoot at Taco Bell, and it's seriously the greatest thing you'll see all day.

"I chose to do the shoot because, not only have I been a huge fan of Taco Bell for my whole life, but also because I have spent a good amount of time and money there during my pregnancies," Johnston tells Romper via email.

Johnston was expecting her second child when she decided to shoot her maternity photos outside of an Atlanta Taco Bell, Red Tricycle reported. According to her blog, Strollers and Stilletos, she became a mother to her first-born, Sawyer, in March 2016.

She shared the photos of her second pregnancy on her blog, where she also asked her followers if they'd ever seen those beautiful maternity photos on Pinterest — expectant mothers "looking so glamorous and ethereal, standing majestically on a mountain in a flowing gown, or on the beach with an awe-inspiring sunset in the background." Then she explained that she wanted to do something "a little different." She called it "something spicier" that showed her in her "natural state."

Well, her maternity shoot, which included photos of Taco Bell's mild sauce held up to her baby bump, was certainly different — and actually quite spicy given the context. Her "sister friend" and owner of Cosmic Creativ, Kelly Daniels, shot the photos and Johnston edited them, according to Johnston's blog. She also gave a shout out to Taco Bell for being there for her in her "time of taco needs" and for helping her "dream come true of having this shoot."

She joked that maybe her family would be blessed with a third baby, Red Tricycle reported, and maybe then she could take those "stunning mountaintop or beachside photos." For now, she felt inspired to shoot at her favorite place — a place she said she can turn to whenever she gets a craving or just doesn't have the energy to cook dinner. Certainly, busy moms can relate!

"I adore every beautiful maternity shoot where the mom-to-be is on a beach or mountain or meadow, but this was so much more reflective of me and my personality," Johnston says.

The shoot was done at sunset, which meant there was a lot of rush hour traffic at the already-busy intersection and she got some odd looks, laughs and thumbs up, Red Tricycle reported. The result is a hilariously honest, and equally beautiful, album.

Her "little Taco Bell baby," Theodore "Teddy" Johnston, arrived on Friday at 4:15 a.m., she says, admitting that her family was feeling healthy enough to go home on Saturday afternoon, but not before stopping by Taco Bell on the way.

Johnston's baby won't be the only one with a possibly inherited love for Taco Bell, either. In March, a Missouri woman named Monica Phillips and her baby daughter, Delta Rose, also broke headlines for having a Taco Bell photoshoot. Phillips, who's (shockingly) also a big fan, had celebrated her daughter's first birthday with a Taco Bell-themed shoot, according to Refinery 29.

In October, a Jacksonville, Florida, couple who loves Taco Bell also took their wedding photos at the fast food joint, Yahoo reported. Skylain, 21, and Jeffery Clarke, 23, dated since their freshmen and junior years of high school, respectively. The couple would meet at their local Taco Bell after class for some food, which Jeffrey would reportedly buy by "scraping quarters together," Yahoo reported. It only makes sense, then, that they celebrate their marriage at the very same place.

Johnston's photoshoot, in addition to being incredibly creative, also reminds moms-to-be everywhere that they are not alone in their love for Taco Bell, and they have nothing to be ashamed of.