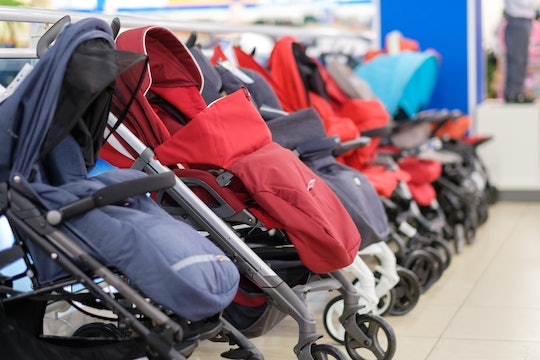 At some point, parents of young children have probably found themselves in the same, frustrating situation: Needing to go up or down stairs with a stroller and no elevator in sight. For parents out and about by themselves, this often means hauling the stroller up or down a flight of stairs with their child in it. Now, you'd think this wouldn't be an issue when it comes to accessing a subway system in a major city like New York City. (How are people with physical disabilities supposed to navigate the system?) But tragically, this mom died while carrying a stroller down NYC subway stairs. And it's truly a disgrace.

According to the New York Times, Malaysia Goodson, 22, was carrying her 1-year-old daughter Rhylee in a stroller down a flight of New York City subway stairs on the evening of Monday, Jan. 28 when she tripped and fell. Goodson was unresponsive when first responders arrived — and ultimately pronounced dead after arriving at a hospital. It isn't clear if she died as a result of the fall or if she had a medical condition, the New York Police Department reportedly told NBC News 4. However, the young mom was still holding onto the stroller when she was discovered unconscious, according to the outlet.

A spokesman for the Metropolitan Transportation Authority — called Goodson's death "a heartbreaking tragedy," also adding the agency is working with police to investigate what happened, the New York Times reported. The only "silver lining" is that Rhylee was conscious and treated at the scene. (She's now with her father and grandmother.) A GoFundMe account has already been created in order to support baby Rhylee.

Unfortunately for parents and people with disabilities, 75 percent of the stops along the NYC subway system have no elevators and many don't have ramps either, according to HuffPost — including the stop at which Goodson fell. Which is kind of a big deal. In fact, the Metropolitan Transportation Authority is in the midst of a lawsuit over the inaccessibility of its stops. But it comes too late for this young mom.

News of Goodson's death seems to have hit hard for fellow NYC subway commuters — especially for fellow stroller-toting parents who also find themselves without elevator. "Everybody who has been a parent or a caregiver knows that this is a problem," Christine Serdjenian Yearwood, founder of Up-Stand, an organization that has advocated for more accessible transit for parents, told the New York Times. "I’ve had a lot of people write and say, 'this could have been me,'" she said.

Twitter was not only heartbroken about the needless death of Malaysia Goodson — it was livid. The Central Brooklyn DSA account tweeted, "Malaysia Goodson died last night for lack of an elevator. The illegal inaccessibility of New York City's subways under @NYGovCuomo and @NYCMayor is a national disgrace."

New York City council member Mark Levine offered some discouraging statistics following Goodson's death. He tweeted, "# of NYC subway stations: 472# of stations w/ elevators: 119# of add'l stations to get elevators in the #FastForward plan: 50 Amount of funding so far secured for the add'l elevators: $0.00 This is unacceptable. This must be fixed."

Another Twitter account wrote, "Malaysia Goodson might still be with us if this station was accessible. Governor Cuomo and state legislators must fully fund the MTA's Fast Forward plan so every station can be made accessible for all riders, including parents like Malaysia."

I know nothing can bring back Malaysia Goodson. But if anything good at all comes from her tragic death, I hope accessibility on the NYC subway system is it. Because a young mother dying from the lack of an elevator simply shouldn't happen.