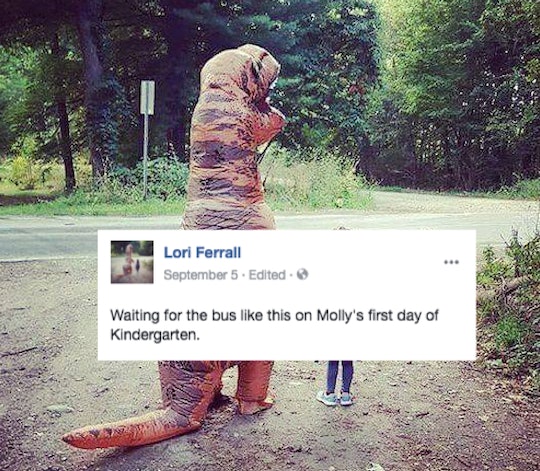 My son is only 2 years old, so I know I have some time before he enrolls in school. Still, I can't help but think about all the ways I could make his first day of kindergarten the best day ever. I'm cooking up ideas, some of which involve costumes. I may even copy this mom who dressed like T-Rex for the first day of school. After all, there's no reason not to have fun, even when emotions run high.

That's what Lori Ferrall thought on Tuesday when she sent her 5-year-old daughter, Molly, off the kindergarten. According to Pix 11, the Michigan mom was having an emotional time with sending her last kid off to school. But instead of focusing on the sad part, Ferrall decided to make the day a blast by donning a Tyrannosaurus-Rex costume while walking Molly to the bus stop.

Ferrall tells Romper in an interview that Molly is a big fan of dinosaurs and "absolutely loves" when her mom wears the costume. So she knew wearing the T-Rex "would be an epic way to send her off," she said. "Plus, it could've helped out another kid that was on the bus already and nervous."

Of course, Ferrall received the reaction from Molly she expected. She tells Romper that her daughter smiled "ear to ear" and did a belly laugh. The best part about that day, Ferrall adds, was "looking down at her knowing she isn't embarrassed of me yet." She says,

I can do these real silly things with her and she thinks I'm the best mom ever. She makes me feel shes proud that I'm her mom. Any parent loves that feeling.

Tuesday's not the first time Ferrall has put on the dino suit. According to the Michigan mom, she wore the costume two years ago for a track-and-field school event her then-12-year-old daughter, Allie, attended. The Ferrall family owns three T-Rex suits in total — two for adults and one for a child. She said her husband would have worn the other suit for Molly's first day of school if her other fan didn't break.

Ferrall's not the first parent to wear a dino outfit while sending their kids off to school, though. In 2016, a Florida mom walked her son to school in a T-Rex costume as a way to teach her kids about individuality and being yourself, according to WSVN.

The Michigan mom, who works as a nutritionist, tells Romper that she didn't know about last year's incident. But Ferrall does think it's "awesome to have any parent take a maybe tough situation and make it easier on themselves or the kids," she says.