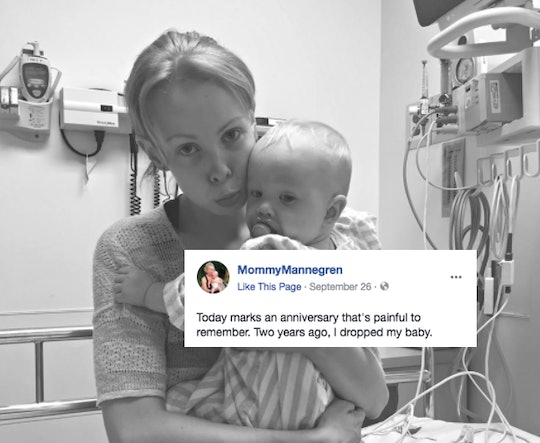 This Mom Dropped Her Son 2 Years Ago, & You Need To See Her Message About Mom Guilt

Last week, Liz Mannegren — the Vancouver-based mom behind parenting blog Mommy Mannegren — shared a Facebook post marking the anniversary of a painful moment in her parenting journey. Two years ago, Mannegren's son fractured his skull after she dropped him, and her story about mom guilt following the incident should serve as a reminder to moms everywhere that their parenting is about more than just one bad day.

Mannegren's story sounds like many other mothers'. She was carrying her infant son across the living room toward the kitchen, just like she did any other day, when he flipped backward out of her arms "with all the strength and speed of a tiny acrobat" and landed on the floor. "In mere seconds, a perfectly normal day turned into an absolute nightmare," Mannegren wrote on Facebook, sharing a picture of herself and her son in the hospital. "We rushed to the ER with a whimpering baby and this mama in tears."

When doctors took an X-ray, they discovered that Mannegren's son — a year old at the time — had fractured his skull from the fall. "I felt like the world's worst mother," Mannegren wrote, continuing:

I was angry at myself for letting this happen, for somehow not predicting this and catching my son. My little boy had trusted me to protect him and to keep him from harm, and I'd quite literally let him down.

As terrifying as a moment like that can be, mistakes like Mannegren's are common. And just like Mannegren, many parents struggle with guilt and stress after a child's injury: one study, conducted by the Children's Hospital of Philadelphia in 2010, found that 37 percent of parents experienced symptoms of significant traumatic stress or acute stress disorder after their children were injured. They replayed the incident in their minds, tried to avoid reminders of the accident, and felt increased anxiety and jumpiness. Nearly half of them continued to experience those symptoms even after half a year had passed since the accident.

"Most of us have had at least one of those days in our lives: a day when your world comes crashing down upon you, knocking you over with the suddenness of its ferocity," Mannegren wrote. "A day that you look back on, and simply wonder, 'How could this have happened?'"

But the lesson to be learned from those accidents, Mannegren wrote, wasn't that parents need to be infinitely more watchful of their children or grow overprotective. Instead, moms need to remember that their parenting is about more than just one bad day.

"Today we might feel like a failure-of-a-mother, but we are more than our bad days," Mannegren wrote, continuing:

These miserable, distressing, all-round-awful days serve as not-so-gentle reminders to savour life. Accidents happen. Life is fragile. ... Motherhood is not defined by any single action, but rather, by the whole. I look at myself and see a woman who failed to grab her son in time. My son looks at me and sees "mom" -- the one who comforts and holds him when he falls.

Pediatricians routinely stress that accidents happen. They happen often. And when they do, it's important for parents to be able to bounce back — for their own sake and their children's. "Research consistently shows the important role that parents play in a child's recovery," Nancy Kassam-Adams, director of the behavioral science core at the Children's Hospital of Philadelphia's Center for Injury Research and Prevention, said in a statement. "So, in addition to all the things parents do to help their child recover, it's very important that they also take good care of themselves."

Mannegren encourages other moms to share their difficult moments, too. "By opening up about our own worst days and feelings of mom-guilt, we actually learn that we’re not alone," she tells Romper. "We all have days where we feel as if we’ve failed. By talking about it, we learn to better support and encourage one another through the difficult moments."

Parents who need help dealing with a child's injury can get support from friends or a professional, as well as using resources from sources like After the Injury, which provides parents with resources for coping. And remember — parenting is about more than a single bad day.

More Like This
Here’s What You Need To Know About That Viral 1960s Baby Formula “Recipe”
First Look: The New Jujube x Lilo & Stich Collaboration
10 Ways ‘Workin' Moms’ Is Basically A Crash Course In Parenting
10 Of Céline Dion's Best Quotes on Motherhood