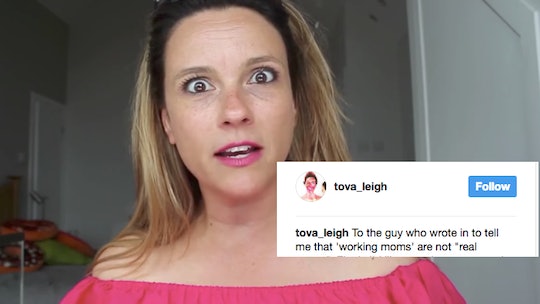 Tova Leigh - My Thoughts About Stuff/YouTube

Working moms have heard it all. They've probably heard or read every criticism in the book when it comes to their decision to be a working parent. So when someone tried to tell Tova Leigh she's not a "real" mom because she's also a working mom, she definitely had some feelings about that extreme opinion. Leigh had the best response to a guy who told her working moms aren't "real moms," and you've really got to read it.

The Stir, hosted on CafeMom.com, reported that when "a ridiculous troll" tried to say working moms aren't "real moms," Leigh was having none of it. She's reportedly a mom, an actress, and a writer, and Leigh stated on her website that her mission "is to get through the day, one pile of laundry after another, and with plenty of wine and cake." So she obviously keeps pretty busy. But she had enough time to fire back at the criticism, in an epic Instagram post that every mom — working or stay-at-home — has to see.

"To the guy who wrote in to tell me that 'working moms' are not 'real moms', Firstly I'd like to welcome you to the 21st century," the epic post began. And according to Mommyish, Leigh continued:

You probably missed the memo, and this may come as a shock, but news flash - women work.

And her post only got better from there. Check it out:

Leigh's post on Instagram already has a ton of likes and comments, mostly from other moms replying in solidarity to her very long, very accurate response to the person who tried to suggest that just because a mother might choose to work, she's not a "real mom." The conclusion of her post was probably the best part, and summed up her feelings on the matter with one sentence. If people like her critic were not going to offer their help and support, they could, as Leigh put it: "...mind your own damn business."

And Leigh is 100 percent correct. In her Instagram post, she wrote that real moms, "are all kicking ass on a daily basis, at home, at work and everywhere in between." According to the United States Department of Labor, 70 percent of women with kids under 18 "participate in the labor force," based on the latest annual data. So yeah, moms are everywhere, including in all corners of the working world.

So, are people who argue that working moms aren't real moms really trying to say that 70 percent of moms aren't "real" moms? What does that mean, exactly? Are they imaginary? Or is the sentiment that they just aren't as "real" as moms who don't work?

Thankfully, the comments on Leigh's Instagram post were overwhelmingly positive. For example, Instagram user denim_dev wrote, "I have been a stay at home mom and a working mom and it's all effing hard. I also didn't breastfeed my kids and they're still alive. If you're a mom, you're a real mom. Love you so hard for all you said here."

So what about "working dads" are they perceived the same way??? For those who have to work, we are not bad people. We put our families first before our needs. So what makes us "real" parents then.

A recent study found that moms put in 98 hours of work a week, after combining the time spent on family plus work duties. Numbers like that reflect what itsmommytimenow wrote: that women often put everything else first, and that includes the labor necessary for both work and family tasks.

It's unbelievably ignorant to suggest that all of those mothers, who put all of that time in, are not "real moms" if some of that time is spent on a job in addition to parental duties. And Leigh clearly has no patience for people who think that way.

More Like This
Dr. Jill Biden Just Delivered Some Frank, But Powerful, Advice On Motherhood
Reddit Applauds Mom Of Five Who Stood Her Ground & Left Sleeping Dad Behind
Sex And Mom Guilt: When I Date Someone New, Am I Cheating On My Kids?
9 Reasons Why Some Women Can't Breastfeed