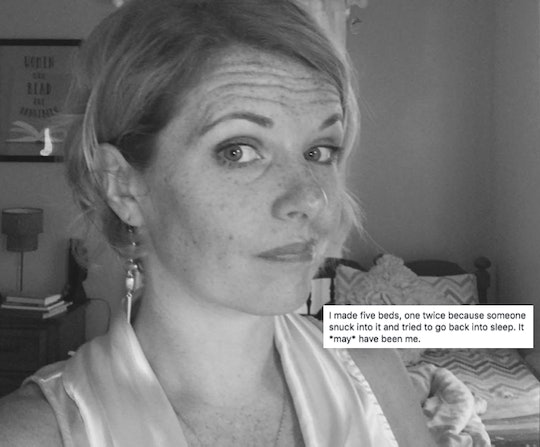 This Mom's Post About Everything She Does Before 9 A.M. Will Exhaust You

If you're a parent who happens to work outside of the home, then you know exactly how chaotic mornings can be — even more hectic than when you're on the clock. Dragging everyone out of bed, eating breakfast, getting everyone dressed, remembering backpacks, lunches, school projects, and getting the kiddos to school and yourself to work on time is no easy feat; and yet, childless co-workers just don't get it. That's why this mom explaining everything she does before she goes to work in an ode to working parents everywhere will leave you shouting, "Amen!"

See, mom of four Liz Petrone is sick and tired of co-workers commenting on her arrival time each day. And she's had enough. On Sept. 20, the 38-year-old IT professional and blogger unloaded her typical morning routine on Facebook, writing:

This morning I woke four sleepy humans. Some I gently patted, some I prodded, and one I pulled the covers off and tried to roll onto the floor when the pat and the prod fell short. I'm not proud of that last one. I made five beds, one twice because someone snuck into it and tried to go back into sleep. It *may* have been me.

The busy mama continued to rattle off her chaotic morning grind, which includes:

"By the time I sit in my chair at work and fire up my computer, my Fitbit says I have walked 2.5 miles. All just to get us ready and out of the house," Petrone wrote on Facebook. "And if walking 2.5 miles and not actually making it anywhere at all ain't exactly what this stage of life looks like I don't what is."

This is so true. As a work-from-home mom, by the time I'm finally out of the door with my three kiddos each morning for school drop-offs, I've managed to wrack up more than 2,500 steps. (Which is admittedly less than Petrone. But still!)

When I worked at a small newspaper, a co-worker would regularly comment on how lucky I was to leave early every day to pick up my children. Never mind that, you know, I also came in earlier than she did and I often worked later on at home. Plus, it's not like I was leaving to go take a nap or have a spa day; I was heading off to workday, round two, with my kids.

“A lot of people in society tend to only validate the hours we spend earning a wage as work, but some of the hardest work that I do, and some of the hardest work I know other moms are doing, is done outside of the office,” Petrone told People. “It’s beautiful to have children, but it’s hard. Just because we’re not earning money for it doesn’t mean it’s not work.”

The truth of the matter — whether you stay at home, work from home or work outside of the home — is life with kids is a tad more complicated than it seems to those who aren't currently living it. At the same time, though, Petrone explained that she isn't sharing her morning rodeo to attract sympathy. Think of it more as an act of solidarity, along with a gentle PSA to the childless co-workers who heckle parents about their arrival/departure times.

"To the working mamas, I feel you. I feel you so hard right now. But more than that, to ALL the mamas, I'm raising my cup of (now cold) coffee. You keep on doing you, sister, whatever that looks like," Petrone concluded her viral Facebook post. "Unless it looks like judgement. Ain't nobody got time for that ish. Some of us have work to do."

Amen to that, mama. Amen.