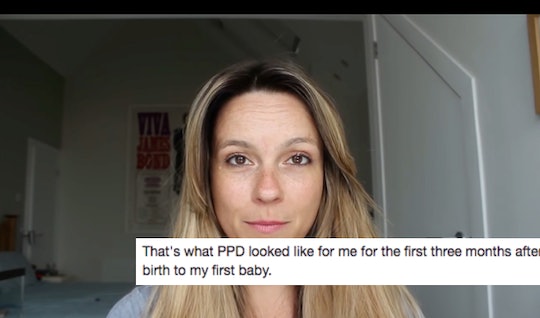 Though a common condition, postpartum depression can manifest itself as a wide range of symptoms. For some women, it is overwhelming sadness; for others, crippling guilt. Whatever the symptoms, PPD can have a profound impact on a mother. That's why this mom's explanation how postpartum depression affected her and it might surprise you.

Mom and blogger, Tova Leigh, took to Facebook on Aug. 16 to share her experience with PPD and how it changed her understanding of the condition. Leigh posted a photo of herself with her firstborn when she was four months old, along with an explanation of her mindset at the time — a new mom, three months postpartum. She detailed her constant concern for the baby, sharing that she would spend her nights sitting by his crib just to be sure that he was still breathing:

I remember sitting there, shattered and broken and utterly exhausted but I just couldn’t let go. The fear that something might happen to her, and the overwhelming love I felt made me completely crazy and although I knew I was being ridiculous ― I just couldn’t help myself.

All of this worrying made Leigh feel alone in her experience and like she was “slowly losing [her] mind.” She explained that she didn't know it at the time, but she was experiencing PPD.

Leigh ended her post with an important message to other moms who may be suffering from PPD and those who care for them:

While her symptoms may not have been what she expected from PPD, they were well within the parameters of the condition. Postpartum Progress lists 17 unique symptoms that can be attributed to PPD including confusion, hopelessness, and fear-enduced the lack of sleep that Leigh detailed in her post. New moms may experience some or all of these symptoms and the differences between moms can lead women, such as Leigh, to not realize that they are in fact suffering from PPD.

Within the conclusion of Leigh's post is another important message: reach out for help if you need it. A recent study found that one in five women suffering from PPD keep their feelings to themselves for one reason or another. As Leigh said, if you, or someone you know, may have PPD, "there is no shame in asking for help." Silent suffering doesn't benefit anyone.

Stories such as this are important because they remind us of the unique experience that is motherhood. One in seven new mothers experience postpartum depression, but not all in the same way. By sharing and confiding in one another, moms have the power to break down the barriors surrounding important discussions about mental health and make help more accessible.