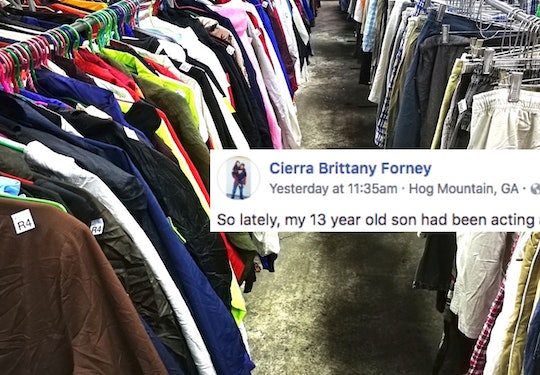 I'm not sure at what point children begin noticing and caring about clothing brands. But I know that for many kids, having "brand-name" clothes becomes something that's truly important to them — and anything else is simply sub-par. Unworthy of their consideration. This isn't necessarily a terrible thing, unless the said kid starts looking down on others for the type of clothing they wear (or don't wear). Then it suddenly becomes a very big problem that probably needs to be addressed — maybe even in an attention-grabbing way. Example: This mom forced her son to shop at Goodwill after she noticed that he had been acting a bit "entitled," and parents are praising her for it.

On Sunday morning, a Georgia woman named Cierra Brittany Forey shared a photo on Facebook of her teenage son at Goodwill, ABC News affiliate WFAA Channel 8 reported. So far, her Facebook post has managed to attract more than 370,000 likes, over 140,000 shares, and nearly 80,000 comments. And it isn't hard to see way.

"So lately, my 13 year old son had been acting a little... entitled. Acting like he's too good to shop at Wal-Mart or making snarky comments about kids at school who shop at the goodwill and quite a few other things," Forey wrote on Facebook.

I don't tolerate that. Today, he took his own 20.00 to the goodwill to buy clothes to wear the entire week to school. Whatever he found is what he would have to wear. He isn't happy and shed a few tears but I firmly believe in 15 years he will look back and laugh at the day his Mom made him shop at goodwill. I want to teach my kids that money isn't everything and if you have to degrade other people because of where they shop, then you too will shop there.

Forey also noted that she, personally, loves Goodwill. And, "If you have something rude to say about my choices, keep that to yourself because IDGAF. I'm trying to raise good, respectful humans," she wrote. This mama clearly isn't messing around!

A photo of her son dragging his Goodwill selection behind him at the store while accompanied her story. And the comment section soon lit up with praise. "Yasssssss girl you just won parent of the year in my book," one person wrote.

Another commented, "Yay mom!!! We need more parents like you! Who believe their future is very important!!!"

"You did a great job," another Facebook user commented. "He needs to know not everyone can afford to shop for new clothes at the mall. I love Good Will [sic] also."

Yet another person wrote, "You are a good momma. There is absolutely nothing wrong with wearing cloths [sic] from goodwill. A lot of people donate really nice close for the very reason to give a good deal to someone who is less fortunate than themselves. It’s a win win in my book!!"

On the other hand, some commenters weren't as impressed by this mom's tactic. "Is there any wonder WHY he feel 'entitled'? It didn’t happen in a vacuum! He’s entitled because he’s been bought whatever he wants so to about face one day, practice tough love on the behaviour YOU created, and then post for accolades on FB ... Reminds me of the DQ Mom who make her small child throw out the ice cream because she didn’t say thank you," one critic wrote.

In case you're wondering, the "DQ mom" to which this commenter was referring wrote a viral Facebook post in 2016 about throwing her three kids' ice cream cones away after they didn't thank their server, as CafeMom reported.

While the overwhelming majority of comments praised how this mom handled the situation and agreed that it was a valuable and teachable moment, there is a point to consider regarding the criticism some expressed when it comes to sharing these moments on social media. "I think it's something as a parent you have to be very careful," Dr. Andres Viana, an assistant professor of psychology at the University of Houston, told ABC 13 in May 2017, in regard to public punishment, in some cases. (Viana was commenting, specifically, about a mom who took action after her daughter posted a photo on social media of herself posting with an unopened bottle of vodka.) "They may take the parents approach in a very negative way."

Personally, I'm not sure that Forey's lesson falls under the same umbrella. Or maybe it does and I'm just biased because my kids mostly wear second-hand clothing. Whether or not you agree with this mom's tactics at Goodwill, the ultimate lesson was a valuable one for kids: Don't look down on people for what they wear. Period. Because you never know someone else's situation — and just because you show up to school wearing an $80 shirt every day, it doesn't automatically make you better than someone rocking a $1 second-hand shirt.

More Like This
Parents Have Thoughts After Court Orders Nursing Mom To Use Bottle In Custody Dispute
6-Year-Old Boy Has Zero Regrets After Ordering $1,000 Worth Of Food On Grubhub
Trans Youth Describe The Importance (& Joy) Of Family Support In Moving New Documentary
Bluey's Mom Chilli Graced The Cover Of 'InStyle' & It's The Recognition She Deserves
What Parents Are Talking About — Delivered Straight To Your Inbox