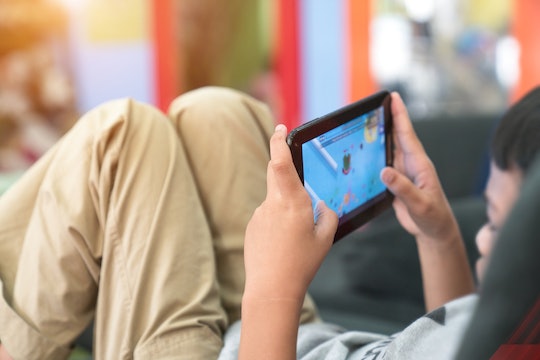 Something as innocent as watching cartoons has somehow turned into a potential minefield of dangerous content for children. With the digital age in full swing, kids are no longer simply turning on a television and scanning through FCC-approved content. Instead, children are on the internet searching for videos, where oversight and filtering dangerous content has become problematic. Recently, as CBS News reported, one mom found self-harm tips in YouTube Kids videos and now she's urging parents to remain vigilant.

Mom and pediatrician, Dr. Free Hess, of the blog PediMom, recently discovered that a video featuring the popular Nintendo game Splatoon on YouTube Kids had been spliced with a self-harm instructional video, according to The Washington Post.

"Remember kids, sideways for attention, longways for results. End it," a man in the video, who mimics the act of cutting one's wrist, says, as Mercury News reported.

In response to Dr. Hess' discovery, a spokesperson for YouTube told Romper in a statement that they "work to ensure the videos in YouTube Kids are family-friendly and take feedback very seriously."

"We appreciate people drawing problematic content to our attention, and make it possible for anyone to flag a video," the statement continued. "Flagged videos are manually reviewed 24/7 and any videos that don't belong in the app are removed."

Dr. Hess shared on her blog that the disturbing video in question has, indeed, been removed from the site, thanks to the tireless efforts of parents through comments, emails and phone calls to YouTube Kids.

In YouTube's statement to Romper, the company said it has "been investing in new controls for parents including the ability to hand pick videos and channels in the app." The statement added, "We are making constant improvements to our systems and recognize there’s more work to do."

According to CBS News, the man in the video has been identified as YouTuber user, Filthy Frank, who is self described on his page as "the embodiment of everything a person should not be." At the moment, there's no evidence that George Miller, Filthy Franks' real name, is responsible for the splicing, as BuzzFeed News reported; it may be the work of trolls. However, as of Monday, his account is still active, with more than 6.2 million followers. Miller did not immediately return Romper's request for comment.

Dr. Hess did not immediately return Romper's request for comment about the video, but she did recently speak with The Washington Post about her discovery. “I think it’s extremely dangerous for our kids,” she told The Washington Post. “I think our kids are facing a whole new world with social media and internet access. It’s changing the way they’re growing, and it’s changing the way they’re developing. I think videos like this put them at risk.”

Though this video is deeply concerning for parents, this is not an isolated incident. According to a report from BuzzFeed News, "YouTube has had to remove at least two of these videos in the past year after parents discovered them while watching cartoons with their children."

YouTube Kids is billed as the safer version of its YouTube parent, with videos that are supposedly safe for kids 13 and under, according to WebWise, but there are still problems with kids having access to potentially damaging content. Just this week, retailer Disney and Nestle pulled advertising from YouTube Kids over questionable videos featuring minors, according to Ad Age.

The video Dr. Hess flagged is especially distressing as suicide is the second leading cause of death for people between the ages 10 to 24, according to the Jason Foundation. In fact, suicide deaths outnumber those from cancer, heart disease, AIDS, birth defects, stroke, pneumonia, influenza, and chronic lung disease combined.

So what can you do to protect your kids? Take advantage of several new features that YouTube Kids put into place in 2017, in response to parental backlash over potentially harmful content, as Mashable reported. For instance, parents can handpick content by turning off the "searchable," function meaning kids can only watch what their parents chose for them, as CNET explained. Parents can also take advantage of YouTube Kid channels from trusted partners like PBS.

In her blog post, Dr. Hess urged parents to be vigilant. "I reported the video and asked my friends and family to report," she wrote, adding that she's deleted the video app and it "will never return to our household." She concluded her post:

I am disturbed, I am saddened, I am disgusted. But I am also relieved that I was there to see this video with my own eyes, so that I could take the appropriate actions to protect my family. I would recommend everyone reading this to take these same steps as well.

Bottom line, the internet is not a safe place for kids based on all the evidence of harmful material available through just a few clicks. All parents can do is take added precautions to make sure their own children remain safe, flag dangerous content like Dr. Hess did, and keep up to date on the latest safety features. In this case, like many others, knowledge is power.