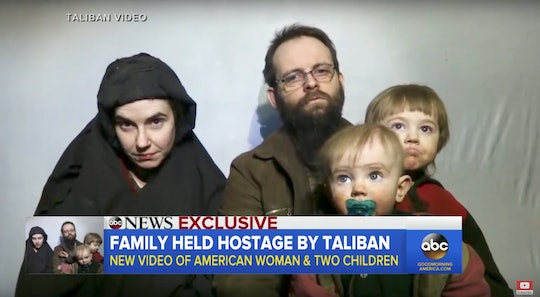 Caitlan Coleman was five months pregnant with her first child in October 2012 as she and her husband, Joshua Boyle, were hiking in the mountainous region near Kabul, Afghanistan, as ABC News reported, which made it all the more tragic when the couple was abducted by a Taliban-affiliated faction. Coleman, who is American, and Boyle, a Canadian, would later welcome that baby while in captivity. It's hard to imagine, but, ultimately, the mom gave birth three times as a hostage in Pakistan before their rescue five years later, as ABC News reported. As of Wednesday, the entire family is free and preparing to head home. And, when they get there, their families and friends will meet their three children for the very first time, making their story all the more remarkable.

The Toronto Star reported Thursday that Boyle had told his parents over the phone that Pakistani forces rescued him, his wife, and his three children as they traveled in the trunk of their captors' car. A shootout in which some of his captors were reportedly killed also left him with shrapnel wounds. Still, despite the traumatic ordeal, the family is reportedly healthy, recovering, and no doubt thankful that the United States intelligence agencies provided the Pakistani forces with information that was essential for their safe release, according to Newsweek.

That's obviously a very heavy conversation for Boyle to have had with his parents the first time he talked to them as a newly free man, but there was somewhat of a lighter note in there as well. As Philly.com reported, his parents, Patrick and Linda Boyle, already knew that they were the grandparents of two little boys thanks to a hostage video featuring the family that was released last year and previous proof of life videos, but they learned over the summer that they now have a little granddaughter as well.

Although the public does not yet know details about the family's time as hostages of the Haqqani network, what they said in that December 2016 hostage video hints at what an awful ordeal they went through. Worse, they had to worry about the safety and well-being of their children in such conditions as well, as Coleman said in the video, according to The Washington Post:

Because of [the captors'] fear, they are willing to kill us, willing to kill women, to kill children, to kill whomever to get these policies reversed or to take revenge. Because of this, I ask if my government can do anything to change the policies of the Afghan government, to stop their policy of executing men before these men start executing their prisoners, their family that they are holding.

For most of us, the idea of giving birth in a foreign country while being held captive by hostile actors is absolutely unimaginable. Living in fear that these captors very well could murder, not only her and her husband, but her children as well must have been a living hell for Coleman. And yet, they survived.

In a letter to Boyle's parents that they received in September 2016, he wrote that he delivered his second son with a flashlight in his mouth, The Toronto Star reported. His description of the situation is actually a bit humorous, which is quite remarkable:

Ta-da! The astonished captors were good and brought all our post-partum needs, so he is now fat and healthy, praise God.

Still, it's safe to assume that the lighter moments were far and few between for Coleman and Boyle over the past five years. "My children have seen their mother defiled," Coleman said in the December hostage video.

The good news is, now that the family is safe, these children will be able to live normal lives, which will be the polar opposite of the depraved conditions into which they were born.