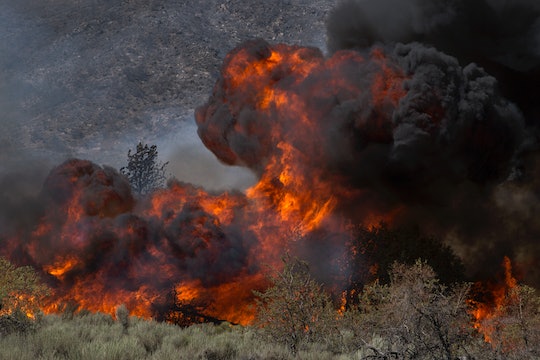 This Story Of A Mom Giving Birth Amid The California Wildfires Will Make You Say "OMG, Phew!"

As wildfires rage for the fourth day in Northern California, the situation in the normally idyllic wine country is nothing less that apocalyptic. More than 20 people are confirmed to have died in the nearly two dozen blazes scourging more than 250 square miles, USA Today reported, and hundreds more are missing. Thousands of residents have literally fled for their lives, leaving decimated homes and businesses behind. It's pretty much impossible to imagine going through the hard work of bringing a child into the world under those conditions, but this mom did give birth amid the California wildfires on Monday. It's a harrowing story — which, honestly, will give you some serious secondhand stress — but, unlike so many of the stories unfolding in the region this week, it does have happy ending.

Nicole Veum was admitted to Sutter Santa Rosa Regional Hospital to be induced Friday, according to NPR, just before the wildfires started whipping largely uncontained through Napa, Sonoma, and neighboring counties Sunday. Medical staff tried twice to induce her with no luck before it started working on the third try and Veum fell into what she described as "a great rhythm," with contractions happening four to five minutes apart, NPR's April Dembsky reported.

Veum's husband, Ben, decided it was time to start playing some opera — and that's when the hospital's power flicked out and its generators kicked on, according to NPR, and thick smoke that Nicole would soon smell and see infiltrated the hospital.

The wildfires were coming for them, just as their baby was about to be born.

Suddenly, when they should have been waiting for Veum's water to break, medical professionals taking care of her were giving her medication to stop the contractions. "We were like 'Noooo.' It was the worst news," the now-new mom told NPR. "To have tried for three days and then OK, here's the shot that's going to end all of that."

Instead of welcoming her baby there, Veum would have to join the other patients in Santa Rosa hospitals in evacuating immediately. In addition to the 80 patients moved to other hospitals from Sutter, about 130 were evacuated from Kaiser Permanente's Santa Rosa medical center around the same time. According to CNN, some of the patients were wearing protective masks or using walkers or wheelchairs to move. Some were even wheeled away on gurneys. As for the Veums, Nicole was reportedly loaded into an ambulance alongside another woman in labor and one with a newborn baby. Her husband was forced to take a bus to Santa Rose Memorial, where he met up with her again, as NPR reported.

Veum ended up having to wait another 12 hours to give birth via C-section that night. And now, finally, finally, she's the mother to her son, Adrian Dodger Veum. Friends had other ideas for his names in light of the fiery circumstances of his birth, though. They suggested Adrian Fuego Veum, she told NPR, and Blaze Veum.

In a Facebook post after the ordeal, Veum thanked everyone who had helped her son come safely into the world despite the potentially dangerous circumstances:

Thank you to everyone who prayed for us and participated in the birth of our new favorite person. I'm so thankful for my birthing team and for all the medical staff and ambulance drivers and those helping out through these horrific fires. I am very humbled by those of you who stepped into the danger to help others. Thank you. And we love our new boy.

Even though Nicole and Ben Veum decided to keep the fire references out of their son's name, he'll always have quite the story to tell about the intense circumstances of his birth. After all, little Adrian came into the world as more than 4,000 firefighters continue to combat the roaring blazes and residents describe the horrifying state of their neighborhoods as a "bombing run," barren stretches of "chimneys and burnt-out cars and cooked trees," as Santa Rosa winemaker Joe Nielsen said, according to SF Gate.

The situation in Northern California is so horrendous that it's hard to really comprehend. Still, new life managed to emerge from it. Adrian Dodger Veum is proof that life goes on, and that the region will eventually be able to rebuild from this disaster.