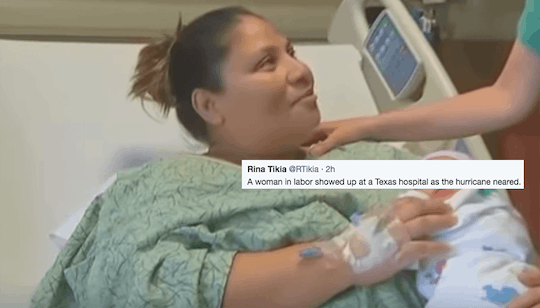 There are some things you can predict with a fair degree of certainty, such as pregnancy due dates and when hurricanes will make landfall — with some wiggle room, of course. For one Corpus Christi, Texas mom-to-be, the timing couldn't have been more disastrous. This mom gave birth during Hurricane Harvey and thankfully, both she and her son are doing well. Irma Rodriguez gave birth to a 7-pound, 18 and three-quarters-inch baby boy as the hurricane made landfall on Friday night, and of course, she named her baby Harvey after the hurricane.

Rodriguez gave birth at Corpus Christi Medical Center Doctors Regional as winds in excess of 130 miles per hour roared around the facility. She told the Corpus Christi Caller-Times, "It was exciting delivering my baby during the hurricane. We are thankful for the care we received at Doctors Regional and for the good health of our family." As for her son's name? A nurse suggested Harvey when Rodriguez arrived at the hospital in labor still without a name for her son, according to the paper. Baby Harvey wasn't the only baby to make his entrance over the weekend as USA Today reported four babies were born during the hurricane in Texas.

It's awesome that Rodriguez named her son Harvey, despite the name now being associated with what could be one of the worst hurricanes in Texas history, as FEMA Director William “Brock” Long told The Washington Post. After Hurricanes Sandy and Katrina, both names dropped in popularity due to their association with such catastrophic devastation. For Rodriguez, naming her son might be a way of reclaiming the name for one very positive outcome of the storm: her son.

What isn't surprising is that so many babies are born during hurricanes. While purely coincidental, two major trends just happen to line up perfectly to make hurricane babies a very real phenomenon: The peak of hurricane season is around late August and early September, according to NOAA — which just so happens to line up with the most common birth months in the United States, per the Centers for Disease Control and Prevention. I can't imagine being ready to give birth and living in a hurricane-prone area, let alone trying to make it to the hospital on time during a Category 4 hurricane.

Thankfully for all the brave mamas who gave birth during Hurricane Harvey, everyone got through both the storm and delivery — and they each have an incredible birth story to tell their kids when they grow up.

More Like This
Mom Gives Birth To Record-Breaking 16-Pound Baby
Chrissy Teigen & John Legend Have Welcomed Their New Baby
What Foods Fight Nausea During Pregnancy?
Sally Field Is The Ultimate Cool Mom Who Once Tried To Set Her Son Up With An Olympian
What Parents Are Talking About — Delivered Straight To Your Inbox