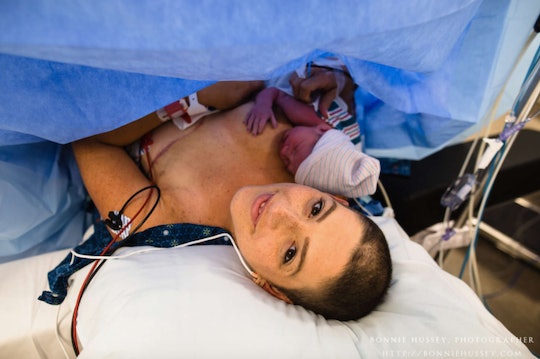 Maria Crider had a lot on her plate even before her first son arrived. Eleven weeks into her pregnancy, she received a diagnosis that was certain to affect her future of as well as the future of her family. But, on April 13, the mom gave birth while battling breast cancer, and the photos from the day are truly breathtaking.

Since her October diagnosis, “it’s been an emotional rollercoaster,” Crider shared with HuffPost. “I’ve been through a unilateral mastectomy, a planned cesarean, a salpingectomy, 16 chemotherapies, 25 out of 28 radiations. I still have ways to go before I can put this part of my life behind me. I did four cycles of Adriamycin and Cytoxan while pregnant." And, thankfully, all went well for her.

"His delivery was confirmation that everything the doctors had told me was true and that he was perfectly healthy,” she told the outlet, and her two other children were happy to welcome Logan home.

Baby Logan's birth was captured by photographer Bonnie Hussey who gave Crider a free session as a part of an annual giveaway that she hosts. For Crider, the images are a treasure and a testament to her strength through out this experience. "The pictures are beyond anything I could have ever hoped for," she told Good Housekeeping. "I'll cherish them forever."

And whereas many would want to keep such a personal experience private, Crider has instead vowed to share her story with others. "Sharing brings awareness," she explained to Hussey, according to HuffPost.

"I could only hope," Hussey told HuffPost, "that [the photoshoot] would reach at least one other woman going through the same experience.” So moms-to-be who might be rightfully stressing over what a breast cancer diagnosis means for a future baby, please know that you're not alone.

Hussey was also there to witness what happened after baby Logan arrived, and she applauded the hospital's care and concern for Crider. “Even though she and the nurses knew that breastfeeding was a slim possibility given the circumstances ― only one breast and having gone through chemotherapy during her pregnancy for Triple Negative Breast Cancer ― her postpartum nurses encouraged her to try," she relayed to HuffPost.

What's more, the hospital had a breast milk bank available for women in need of donor milk. But, she told CafeMom, "Logan latched and nursed in the OR."

Navigating pregnancy and breast cancer is a taxing task, and Crider wishes that her positive experience will be seen as a light for others. “I hope it gives them the courage to talk to their doctors seek a course of action that’s right for both mom and baby,” she told HuffPost. “I want it to give them reassurance that you can go through certain treatment while pregnant. Logan is proof, and he’s just one of hundreds of babies born after chemo."

Although observational studies have shown that "infants exposed to chemotherapy in utero had a lower birthweight at gestational age than did those who were unexposed, and had more complications," these "complications" were, by and large, "not clinically significant," according to The Lancet. The specific study quoted, published in 2012, recommended that "because preterm birth was strongly associated with adverse events, a full-term delivery seems to be of paramount importance." The takeaway? Chemotherapy and pregnancy can coexist, with moms and babies staying healthy, too.

The American Cancer Society's website insists that "pregnant women can safely get treatment for breast cancer," while noting that "the types of treatment used and the timing of treatment might be affected by the pregnancy." Surgery is deemed safe, so is chemotherapy within the second and third trimesters only, the organization notes.

"The oncologist (who I met first) said that he sees no reason why I couldn't do chemo while pregnant, particularly the second trimester since all the major organs have developed," Crider shared with CafeMom. Whereas chemo's in the clear, "hormone therapy, targeted therapy, and radiation therapy," the American Cancer Society notes, "are more likely to harm the baby and are not usually given during pregnancy."

Crider's resilience, as pictured the beautiful images shot by Hussey, is a pretty beautiful thing. Surely, there will be some struggles ahead, but Crider's strength — and the help of a pretty great medical team — will get her though it.

More Like This
Reddit Is Stunned By Mother-In-Law Trying To Breastfeed Her Granddaughter
Two Young Children Have Been Hospitalized Because Their Formula Is Out Of Stock
This Free Website Connects Parents Who Need Formula With Those Who Have It
Parents Will Demand $675,000 From Son & Daughter-In-Law If They Don't Have A Kid Soon