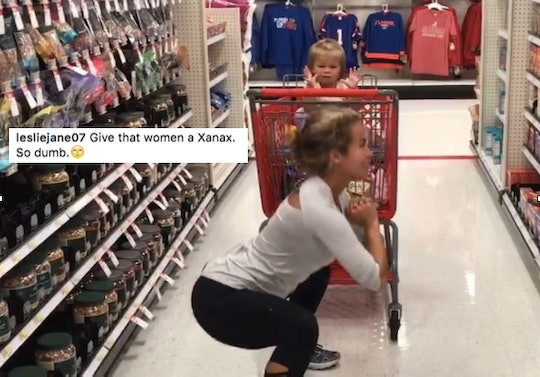 This Mom Got Shamed For Working Out At Target & Ugh, Parents Just Can't Win

In the kitchen, on the beach, at a gas station, and in the bathroom: Mom of two Sia Cooper may be a personal trainer, but she doesn't need to hit the gym in order to squeeze in a good workout. So when Cooper shared her latest impromptu sweat session on Instagram, she was shocked by the negative feedback. That's because this mom got shamed for working out at Target — and seriously, there's no way parents can win.

Cooper is a busy mama, with a 17-month-old named Everly and a 3-year-old named Greyson, according to Us Weekly. And apparently, she took it too far when she decided work out in an aisle of her local Target store. Earlier this month, the 28-year-old fitness guru shared a quirky video on Instagram, featuring her doing squats and walking lunges while her daughter chilled out in the shopping cart. Along with it, she wrote, "Getting it done in @Target because it’s only the most magic place in the entire world (besides Disney world). So if you saw a weirdo working out in Target today-yup that was me! Who needs a friggin’ gym."

Since followers of the super-fit mom are used to Cooper's often unconventional workout spots (and obviously choose to stay updated on her posts,) this video received an overwhelmingly positive response.

"All of your posts about working out anywhere, and getting a workout in no matter what, have inspired me!" one person commented. "Last night at Kohl's, I was carrying my 7 year old daughter on my back doing lunges through the store."

"I'm guilty of getting caught doing stuff like that in public," another commenter shared.

It wasn't until SELF posted her video to its Instagram account on Oct. 15 that the video went viral — and the shamers decided to put in their two cents, according to Us Weekly.

That's when it started to get ugly. "Couldn't one just shop quickly and then go home and do this so this poor child doesn't have to sit in a sorry shopping cart while her Mom gets healthy? This is really stupid," one disgruntled person wrote.

"But why? #attentionstarved much?" another quipped, while another wrote, "Give that women a Xanax. So dumb."

It didn't stop there, as another commented, "Go to your house to work out. You are obstructing the aisle." And yet another person demanded, "Just shop and spend time with your kid!"

Except, here's the thing: Outside of this short clip, none of these naysayers know anything about this mom. Just because she's getting in some squats and lunges while at the store with her daughter doesn't mean she's a neglectful mother. Or depressed. Or "attention-starved." And sorry, but by the looks of it, that Target was pretty darn empty. So there's definitely no obstructing going on there.

"It was meant to be a lighthearted and fun idea," Cooper told Romper of the backlash. "Women out there felt the need to bash it to pieces because they’re either bored with their own lives or insecure with themselves."

Cooper said she was initially surprised by the commenters who felt the need to shame her. But in the end, she chalked it up to the audience.

"When SELF shared my video on their Instagram page, I never realized I would get so many nasty comments on that video because when I shared it on my page, everyone loved it," Cooper told Romper. "Then again, my followers know I get my sweat on anywhere!"

As most parents have probably discovered, it's impossible to devote all of your attention to your children 100 percent of the time. That's why multitasking truly is an art form. Cooper explained to Romper:

It’s vital when you’re a busy mom who might not be able to go to a traditional gym setting to workout. I’ve gotten workouts in at the gas station (yup I’ve got a video!), doing laundry, while cooking, and even while bathing my kids.

As a mom of three who runs marathons and works from home, I completely understand where Cooper is coming from. Sometimes, you've just got to get creative. (Granted, I've never ran laps around Target, or lifted weights in my bathroom, but still.) During the summer months, I frequently bring my oldest to our fitness center and let him jog or walk around the indoor track while I log my miles.

In my opinion, Cooper's videos are both entertaining and inspiring. The only thing her shamers have accomplished is confirming the fact that mothers are damned if we do and damned if we don't. We're expected to get our pre-baby bodies back ASAP after childbirth. Yet we're judged for actually taking the time away from our children to do so. And, as Cooper's video has so excellently demonstrated, we also get shamed for trying to workout while with our kids. Ugh! Parents just can't win.

I truly hope she doesn't let the naysayers get to her — because this mom is a multi-tasking bad*ss. And she just gained me as a follower.