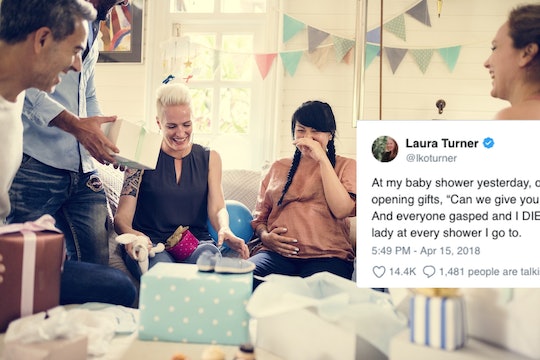 Any parent-to-be will tell you that one of the first things you're told to do when arranging a baby shower is to put together your registry. Otherwise, you will be hounded by your family and friends until day-of, asking you what you need. (Yet, none of them will actually buy items from your registry, even though they begged you to create one to make "their lives easier." #teambitter.) This mom, though, received a baby shower gift that's actually genius — and she didn't need to use Target's online registry to get it.

San Francisco-based writer Laura Turner, who goes by the handle @lkoturner on Twitter, took to social media on Sunday to recall a special moment at her baby shower Saturday involving what's really the gift to end all gifts. Turner wrote on Twitter: "At my baby shower yesterday, one woman said, before I started opening gifts, 'Can we give you the gift of no thank-you notes?' And everyone gasped and I DIED and now I’m going to be that lady at every shower I go to."

Not surprisingly, Turner's tweet quickly went viral, receiving nearly 1,300 retweets and more than 14,200 likes. Romper reached out to Turner for an interview, but didn't hear back in time for publication.

The "non thank-you notes" gift is something parents and non-parents alike could appreciate. The fact is, new parents have a hell of a lot to deal with — even before their baby decides to make their grand entrance into the world. Not only do you have the stress of carrying a child and being responsible for their tiny little life, but you have to take care of all those external factors, such as baby-proofing your house, getting your finances in order, setting up insurance, and fielding questions and unwarranted advice from nosy relatives with too much free time.

Then, when you do give birth, you are faced with a whole new set of parenting issues. Five of the most common problems, according to Parents, are juggling work and parenthood, believing you have to be perfect (and, by extension, mom guilt), learning to love your post-baby body, tension with your partner (or, for single parents, bearing all the responsibility), and struggling with feeding.

With all that on your plate, who the hell wants to or has time to spend writing "thank-you" notes to gift givers on top of verbally saying "thank you" to said gift giver while at the baby shower in the first place?

Not this mom (even though I did write them after a lot of procrastination). That's why this gift is low-key brilliant. With this verbal gift, Turner's guest acknowledges the fact that new parents have so much to worry about already. She is telling Turner — and all moms and moms-to-be – that you don't owe anyone anything, ever.

Of course, Turner's followers were left with one big question: Why did everyone gasp? (I was left with this question, too, to be honest.)

In fact, one Twitter user asked Turner directly, "Wait- gasped in a good way? Or gasped in like, a horrified way?" Turns out, it was the former, according to Turner's reply. The guests, she responded in a Sunday tweet, gasped in a "very good" way to indicate that they all thought, "'WHY haven't we all thought of this already?'"

If I were there, I would have probably gasped, too. And most likely yelled, "OMG, that is freaking genius! I am going to take back this Amazon gift card because clearly you don't need it, and I just moved into a new place, and could really use a new coffee maker." But I digress.

I won't lie: Baby shower gifts are great. There are certain material items that parents need to make their lives so much easier when caring for a little one. But new parents also need a lot of support, and sometimes, being let off the hook is so much better than that bottle warmer.