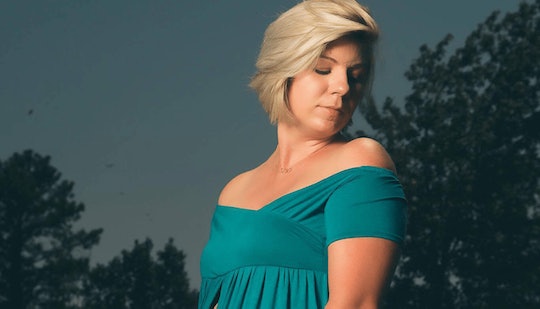 OMG, This Mom Had The Best Maternity Shoot During The Solar Eclipse

While the solar eclipse may have only had just a few minutes of totality over the United States, the moment has been captured for a lifetime for one mom-to-be in the most beautiful way. This mom had a maternity shoot during the solar eclipse and the photos from the day are absolutely breathtaking. Nichole Carver, a mom from Georgia, is due in October with a boy, Hudson. She had the amazing idea for the a solar eclipse maternity shoot and lucky for Carver, her mother-in-law is a professional photographer.

"We had 99.1 percent totality," Carver told FOX 5 Atlanta. "I pitched the idea to her and she ran with it and the photo is out of this world amazing!" Lisa Cruikshank tells Romper she had to juggle a lot to capture her daughter-in-law with the first total solar eclipse to cross the United States in nearly a century. "I didn't have a solar filter for my lens, so I was struggling holding my glasses over my lens and trying not to look at the sun," she said. You would never know Cruikshank faced any difficulty with the shoot, given how effortless the photos look. Carver, for her part, looks like a veritable moon goddess in the dimming light and a flowing teal dress.

This incredible shot of the mom-to-be backed by the eclipse is actually a composite, as Cruikshank merged two images together. She told Romper the sun was just too high in the sky to capture both the eclipse and her daughter-in-law in the same frame. They found Carter’s Dam in Murray County, Georgia to be the perfect location to capture the moment. Other photos from the shoot didn't include the solar eclipse in the same frame, but did capture the ethereal change in lighting as the moon crossed the path of the sun.

The timing of Carver's pregnancy with the solar eclipse also felt extra special, and she wanted to capture the sheer wonder of it all in such a unique way. Cruikshank told ABC 9, "We had been looking for something special for my grandson Hudson's photo shoot, then when we heard the eclipse was coming we had to make it happen."

Carver is a mom of four, with a 5-year-old son named Gavin and a 2-year-old daughter Olivia. "This is our last planned pregnancy as we have experienced the joys of birthing two healthy children and the sadness of loss after delivering my second child, a little girl named Emma, stillborn back in 2014," Carver told FOX 5. "Our little boy is nothing short of a miracle to us and what better way to celebrate him than capturing this once in a life moment in time."

"When it's a once in a lifetime event, do it in style," Carver said on Facebook. She certainly has, with perhaps one of the most beautiful and one of a kind maternity photo shoots imaginable.

I guess it goes without saying that Carver is over the moon about her solar eclipse maternity shoot — as well she should be. The photos are truly out of this world.