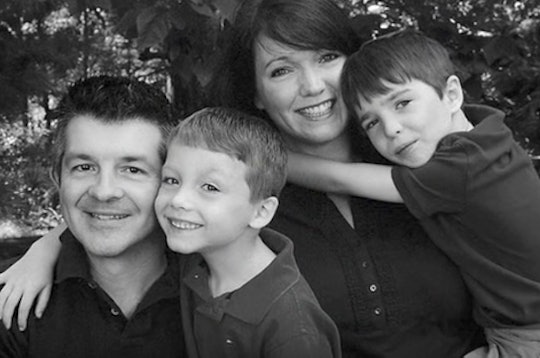 On the first day of school in 2012, Connecticut mom Nicole Hockley took a photo of her two young sons, Dylan and Jake, smiling for the camera before they left for the day. But it's a tradition she's since abandoned for one very heart-wrenching reason: on Dec. 14, 2012, Dylan was one of 20 students killed in the mass shooting at Sandy Hook Elementary School. With a new school year approaching, school shootings certainly aren't something most parents want to be thinking about, but this Sandy Hook mom's message about back-to-school is a reminder that gun violence is too important an issue to dismiss. (And no, her message is not about taking anyone's weapons away from them.)

In an essay for TODAY Parents, Hockley wrote that losing her youngest son has forever changed her feelings about the first day of school. While it used to be the same kind of bittersweet occasion that most parents experience, the loss of her young son has meant that sending her older son back to class after summer vacation mostly just feels really scary. That makes total sense of course — it's nerve-wracking in general to send your child off to school alone, but when your child has literally been killed in his classroom, sending your surviving child back each year has to feel terrifying. But instead of allowing herself to be consumed by that fear, Hockley is using her experience to fight back against gun violence, and she's urging other parents to do the same.

While summer vacation is usually a time for kids and their families to play and enjoy the break from the daily school routine, Hockley says that for her family, it's become something else entirely. These days, she wrote, summer vacation is really "more like a mental vacation from news of another school shooting, another gun-related campus suicide, another child accidentally discharging a weapon brought to school to show friends." That might sound grim, but statistics show that it's not necessarily an overreaction: according to Everytown For Gun Safety, there were 160 school shootings in the United States between 2013 and 2015, nearly 53 percent of which occurred at K-12 schools.

For the parents of the children who died in Newtown in 2012, that statistic of course feels all too real. And for Hockley, the prevalence of gun violence in America specifically meant that Dylan, who was only 6 years old when he died, was shot in the arms of his special education assistant, Anne Marie Murphy who was also killed trying to protect him from the bullets.

That's a horrifying image for anyone with school-age children, but what can parents actually do, besides feel afraid to let their little ones board the school bus? Hockley is now the communications director for Sandy Hook Promise, a national non-profit organization created by family members of the victims of the 2012 school shooting in an effort to prevent gun-related deaths, and she says that the best way parents can protect their children from gun violence is by getting involved. And a good place to start is by learning how to identify the signs of potential violent acts before they actually occur.

In an interview with 60 Minutes earlier this month, Hockley said that mass shooters often display signs of the violent intentions ahead of time, according to CBS News, but that most people just don't know how to recognize them. As a result, Hockley now works to train teachers and students on violence prevention, and hopes to bring her message to as many people as possible.

What are some things that parents should know about school shootings ahead of the approaching school year? For one, that they should take any potential warning signs very seriously. According to Sandy Hook Promise's "Know The Signs" campaign, 80 percent of school shooters actually told someone else about their plan ahead of time, meaning that those shootings could have potentially been stopped. But there are other, less obvious warnings signs too: mass shooters often share common traits, like a fascination with guns, issues with aggression and self-regulation, appearing socially withdrawn or isolated, and bragging about having access to firearms.

In addition, parents looking to push back against gun violence can support organizations like the Sandy Hook Promise Foundation, The Brady Campaign To Prevent Gun Violence, or Moms Demand Action, which all share the goal of reducing gun-related violence in America. And by fighting for policy change — both for gun safety, as well as for access to mental health services and support — the risk of gun violence can hopefully be reduced on a much bigger scale.

Any parent with children heading off to school likely has fears about how it will go — will they make friends? Will their teachers be kind? Will they remember how to open their lunchbox containers after the countless practice runs you've had at home? Thankfully for most parents, these concerns will be the biggest they will actually have to face. But as Sandy Hook showed us all, school shootings can and do happen.

That's a dark reality, but being willing to face it also means realizing that there are steps we can take to push back against gun violence. And doing so can minimize the risk, not just for our children, but for everyone else's children, too.