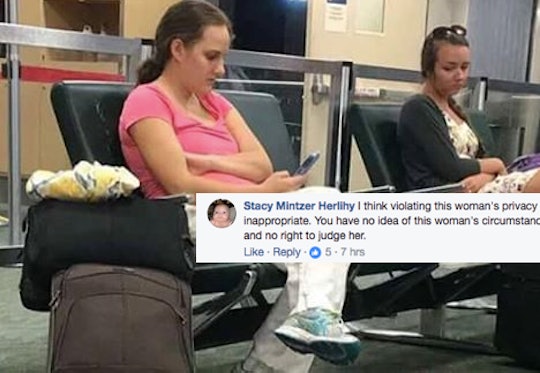 The age of the internet has been fantastic in many ways, allowing people to grow closer, share their stories, and connect in ways that weren't possible before. Unfortunately, though, it also gives people a platform to name and shame absolute strangers — a habit that especially seems to target women and mothers. On Thursday, one mom who was shamed in a viral airport photo told her story, and her words should serve as a reminder as to why people should step away from their keyboards before jumping on the online shaming bandwagon.

Molly Lensing and her infant daughter were photographed at a Colorado airport — without Lensing's permission — last year, according to TODAY. A man whose Facebook name is Christian Naniot snapped a picture of Lensing, looking at her phone while her baby was laid on a cloth on the floor, then uploaded the shot to Facebook along with this charming caption:

Albert Einstein said, "I fear the day that technology will take on our humanity... the world will be populated by a generation of idiots"

Naniot did not immediately respond to Romper's request for comment.

The photo quickly garnered more than 65,000 shares and nearly 2,000 comments from strangers around the globe. And while some people jumped to Lansing's defense and criticized the fly-by photographer's invasion of her privacy, many were more than happy to criticize Lensing without knowing anything about her story. (Oh, and just an aside about that caption: um, Einstein never said that.)

"Not everyone has an innate sense of motherhood," one commenter wrote, while another chimed in, "She doesn't deserve that child." One person suggested Lensing should be sterilized, in a stunningly terrible example of just how often online shaming of women turns into language that's violent and threatening.

Once a few viewers had identified Lensing, she began getting direct messages from strangers on Facebook who wanted to berate her parenting. Both privately and publicly, people were happy to sling a surprising number of ugly insults and judgments at a total stranger, based on a picture that captured only a single second in time. And that snapshot, as Lensing revealed to TODAY Parents on Thursday, didn't capture a whole host of details about her situation.

"We had the unfortunate luck of being stuck in the middle of the Delta computer shut-down," Lensing said. As a result of the computer malfunction, Lensing and her then 2-month-old daughter ended up stuck in the airport for more than 20 hours. Lensing explained:

Anastasia had been held or in her carrier for many hours. My arms were tired. She needed to stretch. And I had to communicate with all the family members wondering where the heck we were. ... I absolutely feel as though my privacy was violated. I had recently started working on a labor floor, and I was terrified of my co-workers or boss seeing the photo and comments and believing that I should no longer work with infants. Thankfully, this never happened.

For a single person making a comment on a picture, it can seem like their actions are mostly harmless. However, behind every single women-shaming viral post is, whoa, actual women. Yes, that includes the mom whose picture is captured at the airport, or the elderly lady at a gym whose picture is snapped and shamed online. That includes the high school girls and boys who are featured in viral embarrassing videos online.

And in instances like Lensing's, that false depiction of a situation and the group shaming that goes along with it can create a dangerous environment for an individual. In the same way that a viral conspiracy theory spread online led to an actual shooting last year, these instances of online shaming lead to hate mail and death threats showing up in women's inboxes. Just like bullying that occurs in real life, they can lead to or exacerbate mental illness, with several parents blaming cyber bullying and online shaming for the loss of their children to suicide.

Shaming mothers and women isn't a game that takes place within the isolated confines of people's computer screens. There are real people on the other end of that online witch hunt, and very real consequences to having thousands of people ridicule an individual. Perhaps Lensing's story can serve as a reminder, for those who are quick to jump on their keyboards to criticize, that there may just be more to a stranger's story than a single snapshot or tweet can show.

More Like This
No One Is Angrier About The Taylor Swift Ticket Disaster Than Moms
"Corn Kid" Handed Out Over 40,000 Cans Of Corn At A Food Bank Ahead Of Thanksgiving
Hero Who Tackled Colorado Gunman Was At Nightclub With Family To See Drag Show
Department Store Raises Awareness For Children In Foster Care In Emotional Christmas Ad