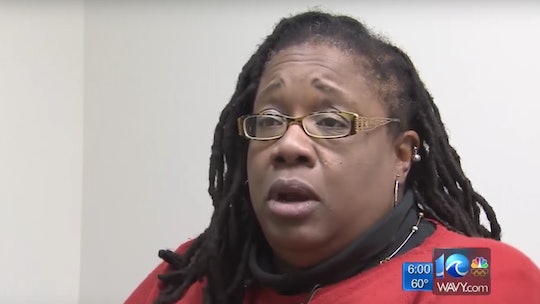 As much as many parents wish they could protect their kids from physical and emotional danger at all times, it's pretty much impossible to act as their guardian angels 24/7. Logistics — such as the fact that children generally have to go off to school and parents have to do their thing elsewhere — get in the way. Still, Sarah Sims of Virginia reportedly came up with a plan to watch out for her fourth-grade daughter when she said she was being bullied at school by giving her a voice recorder to try to catch the alleged interactions in the classroom. The plan ultimately didn't work, and now Sims is reportedly facing felony charges after trying to catch her daughter's bullies in the act.

It all started earlier this school year, when Sims' tried to get in touch with officials at Ocean View Elementary School in Norfolk to talk about the mistreatment her daughter claimed she was enduring there at the hands of other students, CNN reported. She reportedly did not receive a response from the school. (Romper has reached out to Ocean View Elementary School for comment, but did not immediately receive a response.)

So, according to CNN, she decided to put a voice recorder in her daughter's backpack one day in September, hoping to get a better idea of what was going on. Her daughter reportedly put the device into her desk, where it was recording when the school discovered and confiscated it.

Although Sims reportedly had not been able to get anyone at the school to talk to her about the situation, the recorder discovery catapulted the situation into the national spotlight. That's because Sims now faces charges and potential prison time for what she did.

According to BuzzFeed News, Virginia police said Sims has been charged with one felony count of "interception, disclosure, etc., of wire, electronic or oral communications" as well as misdemeanor count for "contributing to the delinquency of a minor." Virginia, though, is a one-party consent state. That means that it is perfectly legal for a person to clandestinely record a conversation as long as he or she is a part of it, or one person who is part of the conversation acquiesces to the recording.

Other states require that all parties involved in a conversation or phone call consent to a recording for the recording to be legal. As noted, Virginia is not one of those states. Romper has reached out to the Norfolk Police Department to inquire about why Sims faces these charges despite Virginia's one-party consent laws, but has not yet received a response. Local television news station WAVY did report, however, that electronics are forbidden in the school.

Police have not yet released a criminal complaint, according to CNN. If Sims is convicted of the felony charges, she could spend up to five years in prison. Her 9-year-old daughter has since been moved to a different class at the same school, but Sims' attorney, Kristin Paulding, is incredulous that it's now her mother who is facing more problems. Here's what she said, according to CNN:

I was appalled when I heard these charges. I was shocked to see that the school would decide to go to the police department and ultimately charge this mother as opposed to sitting her down and having just a simple conversation about what were her concerns and how could the school alleviate those concerns.

Romper has reached out to Paulding for additional comment, but has not yet heard back. Sims' court date is reportedly set for Jan. 8, and it's unclear what will happen between now and then. But Sims' case has captured the attention of people all around the country. Right now, there's a Change.org petition circulating demanding that the charges against her be dropped.