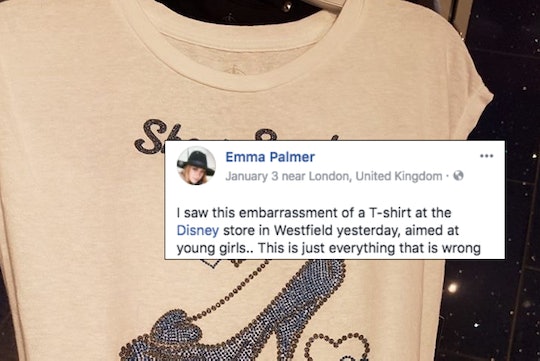 Children are like sponges — they can absorb anything and everything they hear or see. So, it isn't a surprise that most parents find it important to surround their children with positive and empowering messages. And Disney films have been promoting the message that dreams come true for decades (which is a reason why kids love these films so much). But one mom, Emma Palmer, from the United Kingdom is furious over a Disney T-shirt for sending the "wrong" message to young girls. Romper's request for comment from both Disney and Palmer was not immediately returned.

There are so many messages sent out to children that slip through the cracks. But when parents try to bring attention to these types of things when they see them, they're doing that for a good reason — they want to see a change happen. Like Palmer, who shared that she was shopping at a Disney Store in London when she saw a shirt promoting something that she just couldn't agree with, and took to Facebook to let people know just how angry she was. Palmer wrote:

I saw this embarrassment of a t-shirt at the Disney store in Westfield yesterday aimed at young girls. This is just everything that is wrong with messaging to girls in a nutshell. It's 2018.

The shirt, embellished with a high heel and the words "Shoes Speak Louder Than Words," is an obvious reference to Cinderella and the princess' glass slippers. If you recall, Cinderella's glass slippers (and her appearance) were the star of the ball and (eventually) led her to escape a life of caring for her evil stepmother and stepsisters to a life of happily ever after with her prince.

Palmer continued in her Facebook post, writing what every parent would hope to be true: that their child's brain and what they have to say is more important than what they dress themselves in. Palmer wrote:

Surely it is widely recognized that the content of your mind and words you speak are waaaaay more important than your f*cking shoes! *Facepalm*

The shirt was still for sale on Disney's website as of publication, under the title "Cinderella Cap Sleeve Tee for Tweens." The description for the shirt claims that Cinderella's "style and attitude" are "all over" the shirt.

Many people agreed with Palmer. The comments on her post are full of supportive messages towards the outraged mom, letting her know that her complaints are justified. "I'm on your team Emma on this. Stupid bloody message for girls," one person commented on the post.

In the Facebook post, Palmer told one commenter that she is in contact with Disney and she said that that they would get back to her. Palmer's goal? To inspire more empowering messages for a brand as widely recognized as Disney. "I said they need to take this off the shelves and have a serious think about the messages they choose on their clothing," Palmer replied to one commenter.

Palmer, who is the mother to a 6-year-old daughter and 3-year-old son, according to BuzzFeed News, further explained her problem with the message in an interview with the outlet:

The messages you give to a girl should be about what they're thinking, their intelligence, and what they have to say — not what they look like. I understand it is fun to dress up, to wear makeup, and to have nice things — but the point is at no point do I choose that as a substitute for a brain, or for what I have to say.

Palmer has a point — studies have shown that kids do learn about gender roles through the media, like movies and TV shows, that they consume. This, in turn, has an impact on their self-esteem and relationships, according to Common Sense Media. And telling young girls that their shoes are more important than their thoughts puts materialism and the way that others look at them front and center — self-consciousness peaks in the teenage years, according to Live Science, and teens experienced stronger neural reactions when they thought their peers were looking at them.

These studies prove that people need to be telling teens that their actions and words speak louder than their appearances. By bringing attention to a problematic message, Palmer is taking a step to bring awareness to this.