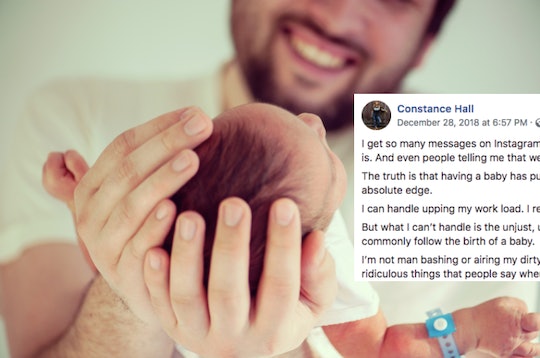 This Mom Is Over People Calling Her Husband A "Hands On" Dad & TBH, She Has A Point

While it takes two to make a baby, the weight of caring for that baby isn't always so equally distributed. More often than not, moms end up carrying more than their fair share of that weight. After taking the lead for years, one mom is over people calling her husband a "hands on" dad" as if that is some sort of achievement. Why is it that when dads do a fraction of what moms do day after day, people are lining up to give them a parenting award?

Constance Hall is a mom and blogger who knows a thing or two about dad worship. While Hall has he and her husband Denim Cooke recently welcomed their a baby boy together and the messages of praise for Cooke have been flooding in, as CaféMom reported. Hall shared in a now viral Facebook post that fans and followers have been calling her and her husband "couple goals," and while she's not trying to shame him online, she wants to clear a few things up for the masses on the outside looking in.

The truth is, as she shared on Facebook, having a baby has put a lot of strain on her marriage — as babies tend to do — and while she can handle a heavier workload, the "unjust, unfair living arrangements that so commonly follow the birth of a baby" have changed their relationship dynamic.

After giving birth to their baby Raja, Hall was thrust into into "a system that greatly benefits one gender while driving another insane," she wrote on Facebook. Many aspects of her and husband's relationship changed with Raja in the picture, and none of them benefitted the new mom.

"The minute the baby came out, I became the ball and chain. Coming somewhere with me became a chore, holding the baby, a favour, we went from being inseparable our saying was 'where you go I go' to Christmas holidays with 2 trips apart already," Hall wrote.

These changes have led Hall to feel a few different ways. First of all, she describes feeling lonely. Exhaustion is a part of motherhood, anyone can tell you that. Moms wake before the sun with the baby and collapse in bed once the baby is asleep. But what no one tells you is how that exhaustion isolates you from your partner.

"That’s the thing about babies," Hall wrote. "They take away all of your alone time and somehow leave you feeling incredibly lonely."

Along with feelings of loneliness, Hall is also downright pissed off — and rightfully so, as Yahoo! reported. Like many other modern women, she is carrying an invisible workload that most dads are free from.

As she wrote in her viral post, "I am resentful. After doing so many loads of washing the other morning while his highness slept in for the 340th time this year I flooded the bathroom, mopped for half an hour, put the baby down, made myself some eggs, walked past the wet patch and slipped, smashing my plate and knees. And I was not expecting to not be able to get up. I just lay there, covered in washing machine water. Furiously crying. So f*cking angry with where motherhood/wifehood has taken me."

But after loneliness and resentment, Hall looped back to exhaustion yet again because speaking from experience as a mom to a little monster — I mean angel — of my own, the struggle is real, y'all. The days are long.

"And I’m f*cking exhausted, so many night feeds, remembering to buy school stuff for next year, to bath all my kids, wash all the clothes, dishes, supermarket, take them out to tire them out, answer 5 thousand questions a day with a smile and keep this house looking relatively clean because someone walked into it the other day and laughed and said 'don’t clean up for us.' But the truth is I f*cking had, for hours," Hall wrote.

Unfortunately, Hall is preaching to the choir it seems. Since she posted her experience on Facebook on Dec. 28, it has been shared nearly 30,000 times and has received 82,000 likes. Other moms shared their own struggles in the comments, both praising and criticizing their own husbands.

One mom pointed out that it isn't about dads "helping out," as you can't "help" with your own life. She wrote, "The thing I just love is, 'you could ask me for help.' If you're awake you'd see what's going on and help without being asked. If you weren't gaming or on your phone you'd notice what's going on and help. Why is it 'help' when we're supposed to be sharing a life? If you wanted to be present you would be. I'm not interrupting your primary, more important life and begging you to join this one anymore."

Another chimed in to share an example of dads being praised for putting in minimal effort as if they've done something miraculous. "My husband wore our youngest in the ergo carrier the other day," she wrote. "And the whole f*cking time people smiled and made comments about how beautiful it was, how lucky I am, how great he is... I wear the baby every day, no one smiles or tells my husband how lucky he is! F*ck off!"

Hall isn't out to put her husband on blast, but she wants her thousands of followers to know that he is far from perfect. Dads need to know that moms need their help and support, and once they have that knowledge, dads need to step up. Because as Hall put it, "having a baby is one thing, sharing that baby is a completely different story."