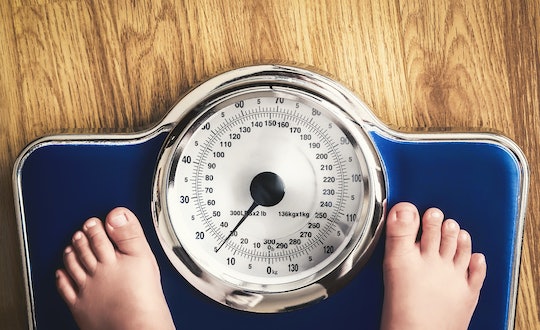 Discussing a child's or teenager's weight and BMI is a particularly touchy subject — one that's probably best left for parents to address, unless a medical professional deems it absolutely necessary. However, sometimes even those in the medical profession don't take the best (or most sensitive) approach. In bringing up that a young person's number on the scale has risen disproportionally to their height, untactful healthcare provers might draw hasty conclusions. Because they're not looking at the big picture. Well, this mom is speaking out after a nurse body-shamed her 13-year-old daughter. And it's seriously a must-read.

Recently, a mom named Julie Venn recounted an infuriating experience she had at her 13-year-old daughter's yearly physical, according to Cafe Mom. Venn shared her story on the "Moms of Tweens and Teens" Facebook group. "As we entered the examination room, I was excited to see how tall Riley would be as this year she has grown a ton!" Venn wrote. "The coach in me has loved seeing her strength and size finally come along and the mom in me has loved watching this beautiful young girl begin to become a young woman." Venn explained that after a physician's assistant took her vitals, the nurse practitioner entered the exam room and started asking Riley a plethora of questions about her sleep habits, diet, exercise (she plays softball an basketball), school, and her period— none of which seemed out of place.

And then it happened.

"The NP then looks down at her computer, then back up at Riley's face and says to my 13 year old daughter — 'Tell me RILEY, HOW CAN YOU EXPLAIN ALL OF THIS WEIGHT YOU'VE GAINED,'" Venn wrote. "My daughter is speechless and her eyes begin to glass over. I am speechless and the NP goes on to explain to her that given what her previous weight was last year — the numbers just don’t correlate with her current height. Has she been eating junk food or has her activity level changed. I LOST MY MIND." She continued:

I had a literal, physical reaction. I put my hand up and said, 'STOP! You need to stop talking to my daughter about her weight. She is 13, she is strong. She is healthy and she is PERFECT. You need to move on!'

The nurse practitioner continued with the exam, but then pulled Venn aside into a separate room afterward. Apparently, the NP didn't understand why her comments had elicited such a reaction — and she even defended her tactics. “I explained in no uncertain terms that she was out of line in the way she dealt with my daughter,” Venn wrote, according to People. “Our girls need to be empowered and supported and celebrated. They already have to compare themselves to the ridiculous social media bullsh*t standards.”

Hey kiddo. Let me tell you how exciting this time of your life is. I see you have started to grow into being a strong young woman and that is awesome! Know that some girls gain weight, some lose weight, some struggle with acne, some feel insecure but remember this- YOU ARE PERFECT just the way you are. As you mature you will be responsible for more things that pertain to your body- hygiene, activity, menstruation, exercise and healthy eating. This is just the beginning of a long, confusing, sometimes scary road to becoming a woman but it is worth it!

Facebook users were quick to show their support for both Venn and Riley — and to express their outrage at the idea that Riley was anything but a healthy, young girl. One person commented, "OMG anyone with a brain knows that the more muscular you are the more you weigh. She is clearly a young and very athletic young lady. Weight is irrelevant. I’m shocked that someone in the medical profession would say something like that!!! She’s perfect!"

Another Facebook user wrote, "Do doctors forget muscle has a higher density than fat and therefore weighs more? BMI is bs, she looks very healthy and any doctor that says otherwise is either blind or dumb."

Yet another person commented, "OMG if this is the pic of your daughter then the NP is an idiot. Many people put on weight when they become active in sports. Muscle weights more than fat. She looks amazing no problem I can see with how she looks."

It's worth pointing out that the U.S. does have a serious problem with childhood obesity and obesity in general. According to the U.S. Centers for Disease Control and Prevention (CDC,) the percentage of kids and adolescents who are obese has more than tripled since the 1970s. In fact, nearly one in five young people between the ages of 6 and 19 in the U.S. has obesity. Obviously, this a public health issue that's not going away anytime soon — and it absolutely needs to be addressed.

Still, that doesn't give healthcare professionals the right to ask, "How can you explain all of the weight you've gained?" to a teenage girl who isn't obese by any stretch of the imagination. As Venn pointed out, the nurse practitioner could have addressed the "issue" with her before even thinking about insinuating that her daughter needed to watch her weight. Or, you know, at least take into account her high level of physical activity and overall build and not overreact by fat-shaming her.

Honestly, I'm so glad this mom not only advocated for her daughter, but also decided to share her experience. Who knows? Maybe other parents will feel empowered by her actions and speak up if they're ever in a similar situation. I can only hope I'm as much of a bad*ss if a healthcare provider is ever so insensitive.

More Like This
Quinta Brunson Got A Sweet Card From A Kid On Abbott Elementary After Her Emmy Win
The FDA Is Worried People Are Cooking Chicken In NyQuil
Nebraska Judge Rules Two Mothers Cannot Appear On Their Sons' Birth Certificates
'Squid Game' Is Coming Back For Season 2 On Netflix: Here’s What Parents Need To Know