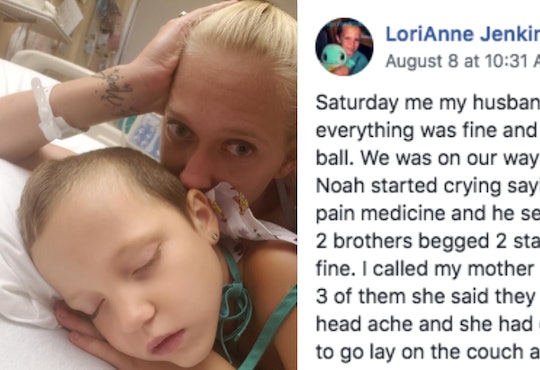 The long days of summer are some of the best times of childhood, but for one North Carolina family a recent summer day held the kind of fright that all parents hope they'll never have to deal with. In a now-viral Facebook post, one mom is warning parents about a mosquito bite that sent her son to the hospital after an infection from the bite caused her 6-year-old boy to suffer seizures and brain swelling.

LoriAnne Surrett of North Carolina was driving her sons over to her mother-in-law’s home when her son Noah began complaining of a headache, as she wrote in a Facebook post meant to warn parents about a rare disease, which has received more than 8,300 reactions and thousands of comments and shares.

In the post, Surrett said that she gave him some children’s pain medication and left him with his grandparents, but the headache persisted the next day. Then, as she shared on Facebook, she received what she called "the scariest call of my life." Her mother-in-law knew something wasn’t right with Noah, who was unresponsive, and urged Surrett to get over to the house quickly while she called emergency services. While the paramedics were treating Noah, they noted that he had a fever of 102.3 degrees and was suffering seizures, Surrett wrote on Facebook.

"Noah’s lips were blue, eyes fixed looking up an was completely link he had a seizure," his mother recounted on Facebook.

A spinal tap at the hospital helped doctors diagnose Noah with La Crosse encephalitis, according to Surrett's Facebook post. She noted that swelling around his brain was the cause of the headache. The condition can cause headache, fever, nausea, vomiting, fatigue, lethargy, and seizures, according to the Centers for Disease Control and Prevention. It occurs most commonly in children under 16 and can incubate for 5 to 15 days after a bite from an infected mosquito, according to the CDC.

While Noah was hospitalized, he was treated with antibiotics, seizure medication, Tylenol, ibuprofen, and morphine, according to his mom's Facebook post. He was unresponsive until the pain medications would begin to wear off. “He screams out in pain from the headaches and he’s really just like a zombie,” she told news station WLOS. “I’ve got five kids and this is absolutely the scariest thing I’ve ever been through in my life. I literally thought my kid was gone when I saw him.”

Noah was in the hospital for five days before he recovered, according to TODAY. “Then all of a sudden, at 3 o’clock that day he just sat up in bed and started talking to me. It was just mind-bowing how much — just in a matter of minutes it’s like he’d come to life,” Surrett told TODAY.

Surrett said in her Facebook post that she has always used bug spray for her children, which is one of the CDC's recommendations for prevention against mosquito-borne illness. But this experience has changed things for her family. "Before now I never really worried I just kept bug spray on them and reapplied every hour or so. Now were all scared to go out," she tells Romper.

In her Facebook post, she said that doctors told her this illness was known in the area, though it was new to her. "This kind of mosquito is out during the day I learned just this past week," she tells Romper. "The symptoms are fever that [won't] go away with medicine, seizure, dazing off into space, and a few more."

According to the CDC, about 70 cases of La Crosse encephalitis are diagnosed each year, typically in the upper Midwest but more recently across the mid-Atlantic and southeast regions. It isn’t the only illness that needs to be of concern by any stretch. Other diseases mosquitoes carry include malaria, Zika, West Nile, Chikungunya virus, and dengue fever, according to the CDC. For further protection against all these illnesses, the CDC recommends wearing long sleeves, pants, and socks and limiting time outdoors when the mosquitoes are most active. Standing water, where mosquitoes lay eggs, should also be removed.

Noah is fortunately back at home and recovering well, but his mother told TODAY that he has been waking up and having nightmares. In her Facebook post, she also described how hard it was on her two other children who were with Noah when he first came down with symptoms.

A GoFundMe page has been set up for the Surrett family to help them with expenses.

Summer may be waning, but there’s still plenty of time to enjoy the outdoors. As Noah’s story warns, this kind of illness can still happen, so be sure everyone — kids and adults — are protected.