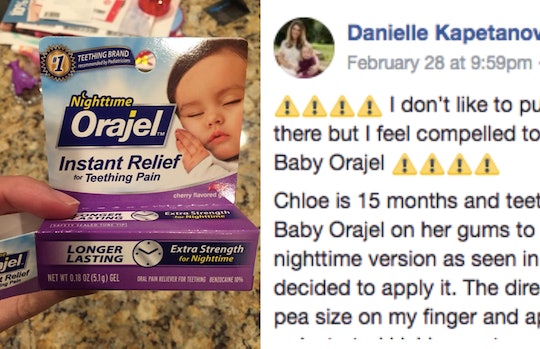 Seeing your child in pain can be one of the hardest things to go through as a parent. The teething period is painful for both parents and children, leading caregivers to try just about anything to provide relief. But this mom is warning parents after her child had a terrible reaction to Baby Orajel. While it is often used by parents without negative consequences, certain components of the product can be dangerous, according to the FDA. Romper has reached out to Orajel for comment, but has yet to hear back at this time.

New mom Danielle Kapetanovic, of Chantilly, Virginia, was looking to ease her daughter's teething pain when she turned to a popular teething gel. But just seconds after administering less than the recommended amount of Baby Orajel to her little one's gums, she says her 15-month-old daughter Chloe stopped breathing and turned blue. She took to Facebook to share the painful experience in an attempt to keep other parents from going through the same thing.

Kapetanovic wrote that after applying the gel, Chloe's "eyes locked in a dead stare, she became limp and stopped breathing. She turned blue.” She then tried hitting her daughter on the back to wake her out of it, but there was no improvement. She administered infant CPR while her husband called for emergency services. Thankfully, Chloe was awake and alert by the time the ambulance arrived and is doing fine now.

After baby Chloe was in the clear, Kapetanovic did some research about the ordeal. She shared in her post that it isn't all that uncommon:

Unfortunately I did not know this in advance, but there are many other parents out there who have experienced the exact same occurrence with their own children when using Baby Orajel. I found online posts dating back to 2008 from parents with literally the same experience - their baby became unresponsive in seconds, went limp, turned blue, became responsive again after 15 seconds or so - it was like someone wrote my same experience.

Kapetanovic also wrote that she learned that "the FDA warns against giving babies Benzocaine - the active ingredient in Baby Orajel." In fact, the FDA has been warning against parents using such products since 2006. Baby Orajel remains a popular solution for parents of teething infants, but it can have dangerous results, according to the FDA website:

But the use of benzocaine gels and liquids for mouth and gum pain can lead to a rare but serious—and sometimes fatal—condition called methemoglobinemia, a disorder in which the amount of oxygen carried through the blood stream is greatly reduced.

The manufacturer of Orajel also advises parents not to use its product on children younger than 2 years old, but Kapetanovic feels that the company is not doing enough to keep parents from using it on young infants. She tells Romper via Facebook message that she shared her story to draw attention to the "manufacturer's defective advertising of Orajel Nighttime, in an attempt to put a stop to the potential misuse of this product by consumers." She says:

The manufacturer says that Orajel Nighttime is recommended for children two years and older, but it's being sold in baby sections of stores, features what appears to be a child under two on the package, and has conflicting information regarding age restrictions on the product information pages of the major online retailers who sell it.

Though Kapetanovic told The Independent that doctors can't be sure Chloe's reaction was caused by benzocaine or something else entirely, she is still urging parents not to use the product, which she believes puts children at risk. "Please, do not give your children Baby Orajel. The potential temporary relief it may provide your baby from teething is simply not worth the risk," she wrote.

For parents of teething littles with concerns over the effects of teething gels, there are a number of safer teething alternatives. The FDA recommends giving babies chilled teething rings or massaging their little gums with your fingers. Aside from that, the FDA recommends contacting health care professionals for advice on what else to do.