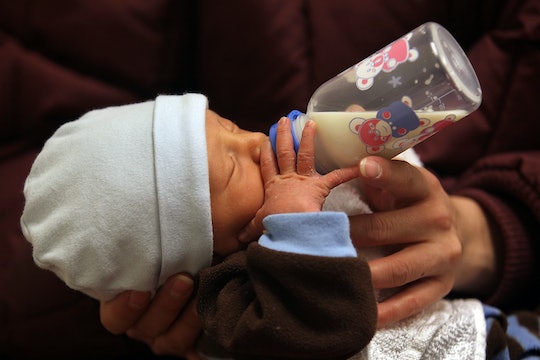 Returning to work after having a baby can feel challenging for so many reasons, but if you're breastfeeding, it's likely that pumping at the office will be one of them. An increasing number of companies are now designating space for use as lactation rooms by female employees, and having a private space seems like it would definitely make pumping at work much easier. But in a recent submission to Slate's advice column "Dear Prudence," this mom thinks her coworker is stealing her breastmilk from her company's lactation room fridge, and it's the kind of icky workplace horror story that no woman ever wants to think about.

Responding to her latest batch of online quandaries, Slate's Mallory Ortberg published a question from "Pumping Mom," who wrote in to ask for some advice about a workplace situation that is both puzzling and, well, just plain gross. After recently returning to work following her maternity leave, Pumping Mom realized that on three separate occasions, about an once of her breastmilk had gone missing from the fridge she and a few other women used to store their pumped milk during the day. When she asked around though, she found that she wasn't actually the only one whose milk was disappearing — other women who'd been storing their milk in the fridge had noticed that some of their milk was gone, too.

The women took their concerns to human resources, and the company added secure keycard entry to the doors, and also began monitoring the room itself. But what they found was super unsettling: a man was indeed spotted trying to get into the room. Pumping Mom said that the company "couldn’t pin anything on him" after questioning him though, and as such, were unable to take further action (including revealing his identity to the women who have had their milk stolen).

Ortberg — presumably also totally weirded out by this scenario — suggested that perhaps Pumping Mom should continue to push HR on this issue (I mean, why would he have been trying to get into a lactation room in the first place?), or that perhaps she may at least want to buy a lock for the fridge so she won't have to worry about her milk continuing to be taken. But, of course, the women in question are definitely in a seriously uncomfortable situation: how are you supposed to feel safe pumping at work when you're pretty convinced that someone you work with is taking your breast milk (I don't even want to think about what he might be doing with it)?

Believe it or not though, Pumping Mom's story may not actually be all that unique. According to Australia's SBS News, a 42-year-old man in Hong Kong was actually arrested a week ago after he allegedly stole a co-workers breast milk and "[replaced] it with store bought milk." And it wasn't even the first time that Hong Kong courts had dealt with a stolen breast milk case: according to the South China Morning Post, in December 2016, a 37-year-old computer technician pleaded guilty to theft after stealing — and then drinking — a coworker's breast milk because "he could not cope with stress." If that weren't already bad enough, the man later sent the woman an anonymous message informing her of what he had done, along with an explicit photo of himself.

While it doesn't appear that similar court cases have surfaced in the United States, Pumping Mom's "Dear Prudence" submission suggests that it could possibly be a more common problem than anyone realizes — even though the fact that it's a problem in the first place is entirely baffling. Unfortunately, protection for breastfeeding women at work in general is still majorly lacking across the country, and for some moms, even accessing space to pump can be a challenge. According to The Huffington Post, while a law does technically exist that requires employers to allow women to pump breast milk while they are at work in a private space that isn't a bathroom, there are plenty of loopholes that allow employers to circumvent the law, and most companies that do offer dedicated lactation rooms have done so voluntarily.

Of course, even if there were more solid legal rights for breastfeeding mothers at work, they may not necessary protect them from having their breast milk stolen by creepy coworkers. Hopefully for Pumping Mom, her HR department will eventually get to the bottom of the situation. But if not, at least it might be a wake-up call to other companies to restrict access to areas used by pumping employees — and perhaps also a reminder for women that they may want to start taking a careful inventory of any breast milk they store in the office fridge.