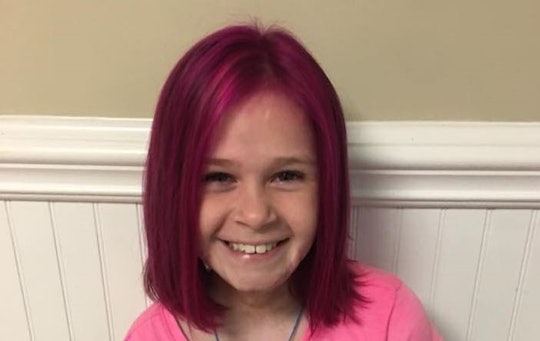 As a parent, saying “no” to your little ones can sometimes feel like a reflex. “Can I have chocolate for dinner?” Nope. “Can I stay up late and watch TV with you?” No way, hit the hay. “Can I pretty please have this new toy?” Not this time. But — from time to time — letting kids have their way means the world to them. And one example of going this route and saying “yes” sometimes comes from this mom who let her daughter dye her hair pink — and this is why.

Rachel Carpenter explained in a now-viral Facebook post — which has more than 51,000 likes and nearly 25,000 shares — that her 10-year-old daughter, Navaeh, really wanted pink hair last summer. But, like a lot of other parents would respond, she wouldn't let her. A few days later, she explained, her daughter went off to camp where they did a “demonstration involving fire.”

“Something went wrong and it caught her on fire,” Carpenter explained on Facebook, adding that her daughter had gotten "horrible burns" over 70 percent of her body and she and Navaeh's father were unsure if their little girl would be able to survive.

Carpenter told Scary Mommy that it was a "long three months" and Navaeh went through "countless surgeries and a demanding recovery period" following the accident. But her daughter was determined be well again and surprised her parents with her strength to recover.

"She was originally suppose to be at the hospital for months longer than she was," Carpenter told Good Housekeeping. "Nevaeh fought so hard and was so determined to do things again like shower, eat and walk that she didn't slow down until she accomplished everything she had to do in order to be released."

Now, one year after the accident, when Nevaeh asked her mom if she could have pink hair, Carpenter had gained a new perspective on life and she said "yes."

"That experience taught me you never know how much time you have left, with anyone," she wrote on Facebook. "So say yes more often, and don't care if anyone thinks your child with pink hair is ridiculous."

"You need to let your child live a little," she told Good Housekeeping. "Time is not promised to anyone."

Carpenter's terrifying experience and new motto serves as a powerful message to all parents: Life is simply too short to always tell your kids — and yourself — "no." Sometimes it's OK let your little one wear that silly outfit to the grocery store or have breakfast for dinner because they just really want waffles. Whatever the request is — "within reason" of course, as Carpenter noted — saying "yes" from time to time is totally worth it.

More Like This
Reddit Applauds Mom Of Five Who Stood Her Ground & Left Sleeping Dad Behind
Gathre’s Winnie The Pooh Collection Is Finally Here
Dr. Jill Biden Just Delivered Some Frank, But Powerful, Advice On Motherhood
How To Build An After-School Routine That Works For Your Family