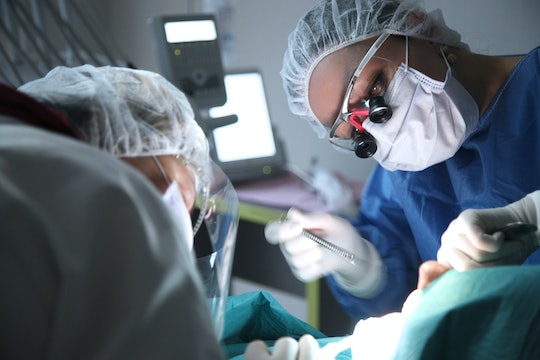 This Mom Let Her Daughter Get Plastic Surgery After She Was Bullied, & People Are Pissed

When I was younger, I was bullied for being fat — and not just by my peers, but some family members too. It was a painful experience, one that planted the seeds of self-doubt and body shame I feel to this day. Even though I was an active kid, I was still chubby, and other kids made me feel less-than for it. So, in a way, I could understand why this mom let her daughter get plastic surgery after she was bullied. She allowed the procedure to help her daughter gain some confidence, but parents are still angry about it.

Bella Harrington, an 11-year-old girl from Richmond, Virginia, had been teased mercilessly by fellow students for having "elf-like" ears that "stuck out too far," according to WRIC. Bella asked her mom, Sabrina, if she could have plastic surgery to pin her ears back, a common procedure known as otopasty, and her mom agreed, WRIC reported.

Sabrina had allowed Bella to have her ears pinned back because she witnessed what the constant bullying was doing to her daughter, according to WRIC. Now social media users are criticizing her for the decision, not only saying her daughter is too young to go under the knife, but that it teaches her to not love herself for the way she is.

Sabrina Harrington now finds herself having to defend her position following the backlash. The Virginia mom told WRIC that oloplasty is similar to other procedures kids get to alter their looks. She said,

It’s no different than getting braces, that changes your appearance. If it’s going to make you feel better about yourself, so be it.

Dr. Joe Niamtu, a cosmetic surgeon based in Richmond who performed the procedure, told WRIC that about 5 percent of the population has ears that protrude. Niamtu also said it's not uncommon for kids as young as 4 years old to undergo oloplasty before they enter school. The reason they go often under the knife at such a young age, he added, is because of bullying, WRIC reported.

The doctor took to social media to speak out about performing the procedure on Bella. He said on his Facebook page, according to People,

It was my honor to help this beautiful young lady to escape the effect of peer bullying from her protruding. Even small facial deformities can produce very negative psychological consequences in childhood that can lead to a lifetime of low self-esteem and negative body image. My biggest reward.

But not everyone is criticizing the mom for her decision. Some social media users even expressed sympathy for the preteen, explaining that they too were bullied and understood the rationale behind the decision.

When she was a baby, the one ear stuck out a lot. She started saying they were being mean, saying different things. I kept telling her, 'It's okay, they don't matter. It doesn't matter what they think.' And it did, to her.

It turns out that Bella is extremely pleased with the results. The 11-year-old student said she was "so happy" when she first saw her new ears, according to The New York Post. Now, Bella said, when she wears her hair up, she's no longer "focused on if people can see them," The New York Post reported.

On one hand, I understand the argument that allowing a kid to undergo plastic surgery to change their appearance as a response to bullying is sending a harmful message about "fixing" yourself to please others. But, as someone who has been bullied, I know first-hand the pain that being teased constantly causes. In the end, though, what matters most is Bella's happiness.