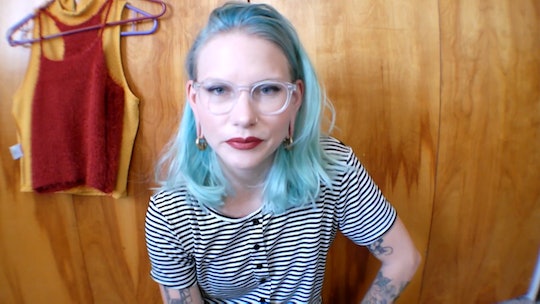 The latest viral story about a mom making unique parenting choices is pretty polarizing, but once you learn her side of the story, it's hard to understand why anyone has a problem with Amy Lyn, a California tattoo apprentice who lets her toddler color her hair and wear makeup. Before you retire to your fainting couch with a severe case of the vapors, take a moment to hear her out, because she actually has a few really good reasons for letting her daughter be in control of her own body.

Lyn explained her philosophy to the Daily Mail, where her choice to let her daughter "apply fake tattoos on her skin" was portrayed as absolutely scandalous (I'm not sure if that's a British thing, because my son and all of my friends' kids definitely wore fake tattoos all the time when they were 2 and 3 years old. Honestly, who else wears fake tattoos? Adults?). But even if the tattoos don't bother you, you might be a little surprised by the rest. It's not about Lyn imposing her aesthetic choices on BellaMae, who's nearly 3. It's just the opposite. "I waited until my daughter started to take interest on her own to introduce temporary tattoos, colorful play makeup, and dyed hair," she said. "From there I let her have the lead. I feel extremely strong about being myself no matter what."

It's BellaMae's body; why shouldn't she have a say in the matter, as long as she's not harming herself? She's actually the second 2-year-old whose mother was internet-shamed for allowing her to dye her hair pink this year; back in June, makeup artist Charity Grace LeBlanc caught hell after posting an Instagram video with her daughter, Felicity. One hysterical comment claimed that the girl would be "bald by the age of 20," according to the Huffington Post, but the vegetable dyes used to achieve bright colors aren't damaging or permanent. And even if they were, it's just hair. It grows back. Who among us doesn't know a little girl who tried to give herself a haircut with disastrous results? They lived through it.

And where, exactly, is the line between what a child can decide for themselves, aesthetics-wise, and what should be left solely up to adults? Can they have a ponytail if they want one, or is that too serious of a choice for a minor to handle? Should we lay out our children's outfits for them until they turn 18? And if a little girl doesn't want her ears pierced, should her parents do it anyway, because they own her body, and she doesn't?

Children don't magically turn into adults the day they turn 18; growing up is a process, and Lyn sees no point in trying prevent her daughter's personality from developing until she's deemed old enough to have one. "I chose to let my daughter start exploring options to express herself as soon as she is capable," she told the Daily Mail, "so that down the line she's less likely to waste time trying to find who she is and can focus on making whatever her dreams are reality."

Lyn prides herself on staying true to who she is, regardless of her age or status as a parent. "I try to stay as creative as possible, so that my daughter can see that even though there are necessities in life like working, and paying bleak bills, you can still be an individual and have joy in anything," she told the Daily Mail. "If I have any kind of message by allowing my daughter to put little temporary tattoos on herself, and playing with makeup, or changing her hair color to look like her favorite crayons, it's that I want her to know freedom of expression." Letting a child be themselves, what a crazy concept.