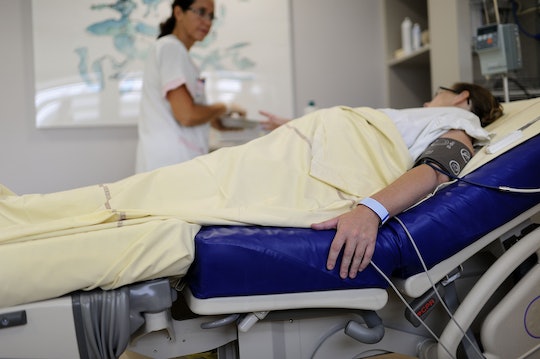 Going into labor should be a beautiful, frustrating, and awe-inspiring experience. But, in some cases, giving birth results in tragedy and heartbreak. One Canadian mother alleges that giving birth to her newborn led to the amputation of four of her limbs. And it's her horrifying allegations about her childbirth that really highlight the importance of proper hospital care.

Lindsey Hubley of Halifax, Nova Scotia, contracted a flesh-eating virus four days after giving birth to her son, Myles, in March, according to CTV News. As a result, she lost four limbs, received a total hysterectomy, and has had to stay in the hospital for the first seven months of her newborn's life. Now, Hubley and her fiancé Mike Sampson have sued the IWK Health Centre where she gave birth, as well as several area doctors, for allegedly failing to give her proper medical care, CTV News reported. (Romper reached out to IWK Health Centre, but did not hear back immediately.)

The ordeal is taking a toll on the family. Sampson, father to Myles, reportedly had to quit his job in order to care for his family, according to CTV News. He told the station,

Myles and I make our way into the hospital pretty much every day to see mama. Our lives have been turned upside down.

Sampson added, according to CTV News,

No mom should ever have to watch their fiancee [sic] and their son walk out the door every night for over 200 days.

Hubley was diagnosed with necrotizing fasciitis, a flesh-eating disease caused by bacteria that enters the body through a break in the skin, according to KTLA. Just days after welcoming Myles into the world, Hubley went to the hospital after feeling a "sharp, distinct, abdominal pain," which she claims doctors blamed on constipation. The next day, Hubley said she was rushed to hospital and into surgery; she was suffering from secondary septic shock and multi-system organ failure, KTLA reported. Below both of her elbows and knees were removed.

The malpractice lawsuit claims that alleged doctor and hospital negligence led to Hubley's severe health problems, according to CTV News. Her attorney Ray Wagner told the station that Hubley suffered a vaginal tear during delivery, and that part of her placenta was not removed at birth — both of which could have contributed to her contracting necrotizing fasciitis. Wagner said his client was "very lucky to have survived," adding,

Our allegations are that had she been properly assessed when she presented at the hospital ... a substantial part of the damage, if not all of it, could have been prevented.

Hubley's experience highlights the ways in which postpartum medical care is an undervalued, under-served, and underfunded aspect of women's health care. Gaps persist in postpartum care that leave many new parents without the support they need after discharging from the hospital, according to Canadian Nurse. And in the United States, in particular, a 2006 Journal of Perinatal Education review found women are not provided with adequate postpartum care, nor is maternal health care "emphasized in national policies or national health objectives" in the country.

And that negligence has real consequences. More than 600 women in the United States die of pregnancy-related causes every year, while 65,000 women face life-threatening complications such as necrotizing fasciitis, according to the U.S. Centers for Disease Control and Prevention. That number, the CDC reported, has only increased significantly over the last two decades, despite advancements in medicine and medical technology. Heart conditions account for the majority of pregnancy-related deaths, but new parents also die from infections, blood clots, and high blood pressure, otherwise known as preeclampsia.

It's not surprising, though, that a medical team would dismiss pain as constipation. In fact, at least in the United States, many nurses have poor knowledge of the warning signs related to pregnancy- and childbirth-related complications, according to a study published this year MCN: American Journal of Maternal/Child Nursing.

In 2017, that just should not be. Doctors, nurses, and other hospital staff need to do more to support and properly care for parents after they give birth. And, as Hubley's case shows, that's absolutely vital.