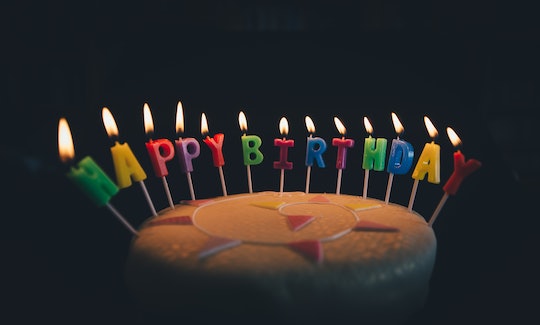 This Mom Made Her Son A Birthday Cake With A Cow Giving Birth, & It’s Amazing

For some kids' birthdays, classic sheet cakes don't cut it. Plenty of millennials remember strolling into a grocery store and flipping through the big, laminated book of birthday cakes topped with airbrushed scenery and TV character figurines. But when a child's tastes aren't particularly mainstream, there are basically two options: fork over the money for a customized bakery creation, or venture into the unknown and tackle a creative cake at home. The Canadian mom who made her son a birthday cake with a cow giving birth is basically a culinary hero.

When Jamie Packard's son, Benz Packard, was about to turn four, he had a farm-themed cake in mind, TODAY reported. That's not a particularly unusual request for a preschooler. But instead of opting to decorate it with a big red barn or a sweet smiling horse, Benz had another idea: a cow giving birth. Benz is no stranger to the realities of farm life. His grandparents have a farm, and his aunt and uncle have a ranch of their own. When Benz isn't working at one of the two, he's reading Canadian Angus 2016 Bull Buyer's Guide or watching National Geographic's large animal veterinarian show, The Incredible Dr. Pol. So for a child with as much real-life farm experience as Benz, a cow giving birth isn't a particularly wild concept.

Jamie posted a picture of the finished cow giving birth cake on Facebook, according to ABC 7 Eyewitness News Chicago. Her caption read:

For the last couple of months, Benz has been asking for a "cow having a calf" cake for his birthday. We tried our best to persuade him, in fact I overheard Tyler say to Benz, "a Thomas the Train cake would be cool.. Would you like Mom to make one for your birthday?". To which he replied, "I don't even watch Thomas the train". We tried. So there I sat, Google imaging "cow having a calf cake" and guess what, there were zero results, surprise, surprise! So as I'm moulding rice crispy squares into little hooves I'm thinking to myself, no Mother is ever really prepared for this kind of stuff. And as I'm applying cherry pie filling as afterbirth, I found myself thinking.. Thank goodness it's only family coming to this party!

Though it's likely Benz's cake could end up being truly one-of-a-kind, parents field wacky party requests all the time. For moms and dads who want to brave making a birthday treat at home, there are plenty of opportunities available to learn the basics of cake decorating without sacrificing a lot of time and money. Michaels Craft Stores and Jo-Ann Fabric and Craft Stores both offer in-store cake decorating classes. Anyone who prefers to learn at home can find dozens of cake decorating classes on Craftsy and nine Wilton courses focusing on everything from buttercream to cookie design to cake pops. Of course, there are plenty of fantastic free tutorials on YouTube. And for anyone who's not sure where to start, a quick search on Pinterest can be a great way to begin brainstorming.

Birthday parties are some of the most memorable occasions of childhood. Whenever a parent goes above and beyond to make a birthday special, it definitely deserves recognition. Cheers to Jamie for being a seriously cool mom!