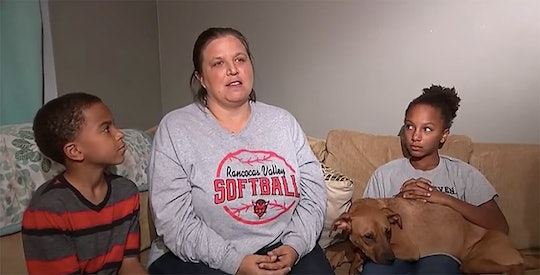 Although some might argue that parental intuition is a cliché, there's definitely a grain of truth to this phenomenon. Case in point: This mom possibly prevented a school shooting by trusting her gut instincts.

Koeberle Bull, a mom to three biracial children, found herself in a disturbing situation when she began receiving racist Facebook messages from a Kentucky resident named Dylan Jarrell, according to NBC News. Although it's not clear how Jarrell, 21, found New Jersey-based Bull, there's no question his alleged threats to her family are irresponsible. In some of the messages Bull shared to her personal Facebook account, Jarrell allegedly wrote that he hoped her "monkey children" would get "hung," among other terrifying remarks, according to The Hill.

Anyone who thinks racism doesn't exist. This is what I woke up to in my inbox this morning. Let's share this and make this guy famous please.

But Bull did more than just share the screenshots with her Facebook friends — she ended up contacting Kentucky police about Jarrell, according to CBS News.

Kentucky police then investigated Jarrell's social media presence, only to find more evidence of "other concerning posts," according to ABC News.

Additionally, authorities discovered a "possessed a firearm, more than 200 rounds of ammunition, a bulletproof vest and a 100-round high-capacity magazine" and a "detailed plan of attack," in Jarrell's possession, according to the Associated Press.

Jarrell was "arrested and charged with second-degree terroristic threatening and harassing communications," according to Cafe Mom, charges he has pleaded not guilty to, as CBS affiliate WYMT reported.

Kentucky police did not immediately respond to Romper’s request for comment.

Following the arrest, Bull took to Facebook on Oct. 19 to express her relief. "I must say I didn't see this coming but thank God I went with my gut," she wrote.

As for Kentuckians? Many people and fellow parents reached out to Bull to share their gratitude and thanks.

"Thank you Ms. Bull! You are a brave, brave woman and I along with all Anderson Countians are glad you went with your gut feeling!" someone wrote on Facebook.

"My daughter is a junior at Anderson County High School. God Bless you for speaking up," another person said. "This would have ended much more tragically without your voice. Thank you from the bottom of my heart."

"The world needs more people like you!" a commenter added. "Thank you for saving mine, and my peers lives! You are an amazing woman."

As a teacher here in Anderson County and a mom of two students in the district, THANK YOU! There aren’t words for the amount of gratitude this small community has for what you have done. You are our own personal hero and guardian angel! Thank you for being persistent and making sure your voice was heard. You saved lives, and we are eternally grateful!

If you're a parent in a similar situation to Bull, don't hesitate to reach out to the appropriate parties with your concerns. As Bull demonstrated in this scary scenario, you never know who you might help — or what you might prevent — if you speak out.