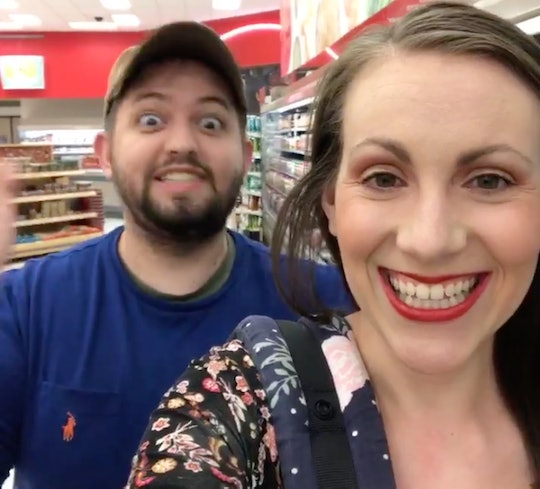 It seems like nearly every mom who breastfeeds has been there: out and about in public, feeding their baby, when a perfect stranger decides to shame them for keeping their child alive. Fortunately, sometimes mothers clap back in beautiful ways afterwards — and that's exactly what one mom did after allegedly being shamed for breastfeeding in Victoria's Secret last week.

According to a video she posted on Facebook, mom Celina Barbour was shopping in Victoria's Secret when she was allegedly shamed by other customers for breastfeeding her 4-month-old baby. She shared that she left the store soon after and headed to a nearby Target, where she and her husband — with their three kids — filmed a quick Facebook Live video taking down critics.

"We just felt like we needed to share a PSA," Barbour said in the video, as she and her family strolled through Target. "In a store that is filled with nothing but pictures of people’s boobs hanging out, you probably shouldn’t say anything to someone that’s breastfeeding."

"In this store, really?" Barbour's husband added, smiling. "It’s a store about boobs. You’re buying bras and underwear that look cute for men to see so that you can have sex. News flash: Sex leads to kids!"

In the video, Barbour said she would have filmed live at Victoria's Secret if her phone hadn't been off at the moment. "If you're going to go in there and you think you're going to see a bit of top boob from a breastfeeder and you have a problem with it, you probably shouldn't shop there," she said. "Because there's boobs all over the pictures, in the entire store, all over the wall. Just saying."

Amen, Barbour, amen. The irony of sexualizing (and then shaming!) a mother who is breastfeeding her child in a store that is all about about celebrating bodies is ridiculous. As writer and mom Maureen Shaw wrote in an op-ed for Quartz last year:

The logic here is baffling. Breasts are intended to feed babies. With all our progress on feminist issues, how can such a simple biological imperative remain so stigmatized? ... Today, breasts have become synonymous with sex in American culture. This means that while advertisements and billboards can expose women’s breasts, new mothers cannot.

Unfortunately, that mix-up between cultural sexualization and breasts' actual biological purpose means that public breastfeeding gets shamed far too often. According to The Guardian, one national study in the United Kingdom found that six out of 10 breastfeeding moms take steps to cover up their breastfeeding while in public, while a full third feel embarrassed or uncomfortable to breastfeed outside their homes. And for a busy mom, staying at home just to breastfeed isn't really an option — so shaming breastfeeding mothers is doing real damage, to both moms and babies.

That's precisely the message Barbour shared when she clapped back at yet another critic: one who shared her video on Facebook and said she should be sitting down and covering up when breastfeeding in order to be respectful to others. "I have older kids. I don't really have time to sit down," Barbour said in her follow-up video. She feeds her baby at least once an hour, she explained, continuing: "Think of how much time of my day I would spend sitting down to breastfeed."

The tension some moms face between wanting to avoid embarrassment and having to continue on with work and everyday life, experts say, could become a reason they quit breastfeeding. And considering that breastfeeding is one of the healthiest things a new mom can do for her child, that's the real shame.

"Breastfeeding gives babies the best start in life and it comes with a whole host of benefits for the mother, too," Dr. Ann Hoskins, deputy director of health and wellbeing for Public Health England, told The Guardian last year. "Anxiety about breastfeeding in public certainly shouldn’t be a barrier to breastfeeding in general."

So here's a huge round of applause for Barbour and every parent out there clapping back at mom-shamers. Hopefully they'll keep responding to the haters until there's none left to discourage breastfeeding.