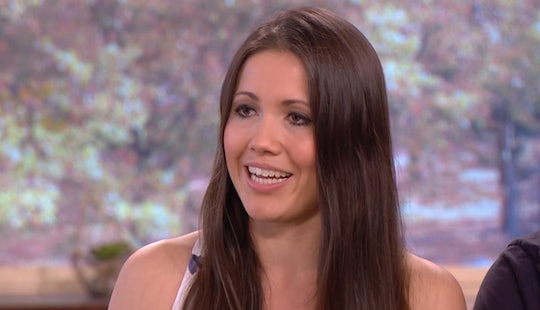 It's been more than five years since that controversial TIME magazine cover depicting extended breastfeeding came out, so it's about time for a new poster-mom/villain to have the spotlight. A UK blogger is garnering national attention because she plans to breastfeed her kids until they're 7, and she's not apologizing or backing down from her plans. Sophie Mei Lan has two daughters, Jasmine, 5, and Ariana, 2, and she's going to breastfeed them as long as they want, no matter what the haters think of her.

During a Thursday appearance on This Morning, Lan said that she originally didn't plan to breastfeed at all. "I thought — because I was a quite young, naive mum — I thought you needed formula milk, so I stocked up on formula," she explained. "It didn't come naturally," but thanks to the support of others, she began nursing, and half a decade later, she has no intention of quitting. Ariana still breastfeeds eight times a day or more, but Jasmine now nurses only at bedtime. Her husband, Chris Hale, said that both girls are able to fall asleep without the breast if his wife isn't around. "I think it's more by association now, that whenever Sophie's with them, it's like they're drawn to them."

Lan admitted that she does benefit from breastfeeding. She told hosts Holly Willoughby and Phillip Schofield that the experience helps her deal with her depression and anxiety. "I actually found that breastfeeding really anchored me, so a lot of the time I can kind of zone out, and I'll be in my own little episode and whatnot, but when I'm feeding my baby — or now, my children — it actually anchors me a lot more and I can have some quality time with them and focus on them." However, that's not why she does it. "A lot of people have said, online especially, 'Oh, you're doing it for yourself,' but I think, as all breastfeeding mothers — and mothers formula-feeding — know, that we're just doing what's best for our babies and kids."

Lan recently told The Sun that her oldest child doesn't mind the stigma surrounding extended breastfeeding: "Jasmine started school last year and I told her not many kids in her class would be feeding, but she’s not bothered." Besides, it's not like she's waltzing into the cafeteria with her boob out, right? And she doesn't really have a clear-cut plan for weaning, either. When Schofield asked Lan how long she plans to breastfeed, she said, "From the start of my breastfeeding journey, everyone's saying, 'When are you gonna stop? When you gonna stop?' But the more I've read up on it, and the more I've researched it, biologically, as mammals, we feed from one to seven years old, until they get their molar teeth, and that's when they can't latch on."

So is that for real? Are we all supposed to be breastfeeding until our kids get their first adult teeth? Well, that's unclear. Humans don't come with instruction manuals, after all. In Breastfeeding: Biocultural Perspectives, authors Patricia Stuart Macadam and Katherine A. Dettwyler note that these days, children in "traditional societies" are generally weaned between ages 2 and 4, and studies of other primates suggest that's pretty standard. Many theories on the "natural" age to wean are based on the weight of the child, but the eruption of the first permanent molar does coincide with the complete maturation of the human immune system, so there is a grain of evidence that nursing might be medically beneficial up until that point. The World Health Organization recommends breastfeeding "up to two years of age or beyond," meaning there's no official expiration date on nursing.

On her blog, Lan mused that although she didn't plan to breastfeed for so long, she finds it odd that feeding children fast food is socially acceptable, but breast milk, which is made for them, is taboo. And Hale, in my opinion, needs a Best Co-Parent Ever mug, stat: "I feel sorry for mothers. Whatever choice they make, they're judged. So whether you choose to breastfeed — or to not breastfeed — from birth to whatever age, you're judged either way, and it's almost like a battle that you can't win ... Do what's best for the people that you care about, and it doesn't really matter what anybody else thinks." Amen to that.

More Like This
Can You Breastfeed After A Breast Lift? Experts Explain
If Breastfeeding Makes You Tired, Here’s How To Keep Your Energy Up
There’s A Reason Your Baby Always Falls Asleep While Breastfeeding
The FDA Is Worried People Are Cooking Chicken In NyQuil