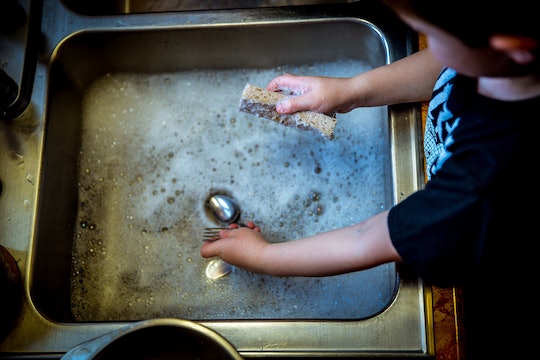 This Mom Posted Photos Of Her Son Doing Chores, & The Internet Freaked Out

Reality star Nikkole Paulun, of 16 and Pregnant fame, has made headlines after posting cute pictures of her 6-year-old son Lyle doing household chores. Paulun posted the pictures to show how important it is to teach their children responsibility, and to teach her son that household chores aren't just "women's work." While many have applauded the mom for teaching her son such values, the pictures have also received much criticism. Here's why the internet freaked out after this mom posted photos of her kid doing chores online.

Experts and research shows that giving your children chores comes with many benefits, especially if they start at a young age. A 2002 study from education professor Dr. Marty Rossman, which followed 84 children into their mid-20s, revealed that those who began doing chores at ages 3 and 4 had better academic and early career success, had better relationships with their families, and were more self-sufficient than kids who didn’t have chores.

Paulun wrote in the photo sets' caption about the value of teaching her son to do chores. She wrote that parents should remember that "a man who believes he shouldn't have to cook or do chores was once a boy who was never taught any better."

Despite research indicating how beneficial childhood chores are, reaction to Paulun's photos suggests that giving children chores is a divisive issue.

Some of the commenters on the photos suggested that Paulun was making her son be her "slave" by doing the chores she didn't want to do. Paulun responded to such criticism by saying that she also does chores but that her son helps her along the way. He also earns an allowance.

Paulun, who is a single mother of two, said in an interview with CBS News that her son likes helping her. "He doesn’t argue with me,” Paulun told CBS News. “He knows, ‘I have to do this,’ and he does it.”

In the caption of the photo, Paulun emphasized that it's important for her son to "know how to do laundry" and "not eat take out every night" because he may one day be a single man.

Another critic accused Paulun of setting a double standard by suggesting she wouldn't teach her daughters "men's work" like "yard work" or changing a tire, the way she's made her son learn traditional "women's work." But Paulun defended herself in the picture's comments, saying that she will teach her daughter how to do such things. She added in an interview with ABC News that she was raised by a single mother who knew how to do "guy stuff."

"She taught me and she's still teaching me," Paulun said.

Experts also say that giving children "must-do" chores is "great for self-discipline and for building their confidence," Jeremy Todd, chief executive of Parentline Plus, told The Guardian. "Chores can also teach children how to plan their own time, taking into consideration others' needs, limits and responsibilities."

It's surprising that this photo has gotten any backlash. When I first saw it, the picture reminded me a lot of my sister and nephew. Like Paulun, my sister is a single mom to her son. He helps her with laundry, and began cooking his own breakfast by the age of 8.

Giving chores seems to be especially important for single mothers, who are more likely to be overwhelmed. But that's not the main reason; a study showed that single mothers who have sons gave them chores so they would do housework as adult men. And that's exactly what Paulun says she hopes for her son. "He’s going to be a good hardworking man," she told ABC News. "You can’t have that if you don’t start teaching them when they’re young."

Besides, it's not like her son never gets to have fun — Paulun posted a picture of Lyle playing video games after finishing his chores.