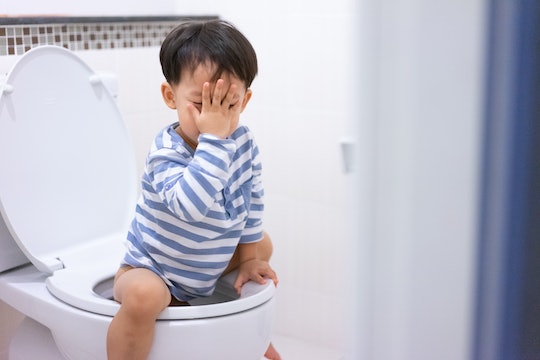 It has often been said that little kids have a lot in common with puppies. Both have a penchant for destroying our most treasured household items, and both will eat just about anything they find lying around on the floor. But one UK mom recently took the comparisons between toddlers and puppies a step further while she was potty training her little girl. Shona McLoughlin actually covered an entire room of her house in puppy pads to keep her toddler from peeing all over the floor, and the photos she shared on social media have parents LOL-crying in solidarity.

More Like This
30 Vintage Photos Of Parents Giving Their Babies A Bottle
When Can Babysitters Get The COVID-19 Vaccine?
15 Face Masks For Kids That Are Cute, Comfortable, & Get The Job Done
The Next Full Moon Is A Major Astrological Event You Don't Want To Miss

"Am I doing it right?" the mom posted on Facebook, along with photos that show "Day One" of her potty training adventures.

In the pictures, a lone training toilet rests on a bed of dozens of puppy pads, while her daughter stands nearby watching cartoons. "Do I just keep sitting her on the potty and hope she gets it?" the mom asked in confusion.

McLoughlin added that the puppy pads were there "just in case she misses... Or maybe its a plot to get a puppy." And other parents could totally relate to her struggle.

"This will be me when I brave letting the boys run about without a nappy on," one mom wrote.

Others shared their best advice for potty training sans puppy pads, like using a sticker chart, putting the child on the toilet right when they wake up, and even putting a diaper inside the toilet so she feels like she's going potty the usual way.

One person poked fun at the mom by saying, "Think you’ve got this toilet training all mixed up. Erin’s supposed to wee in the potty not all over your ENTIRE house!!"

But honestly, who hasn't wished they could lay down some puppy pads when potty training a little kid?

The Mayo Clinic advises parents to wait until their kids are fully ready to start potty training, which usually happens between 18-24 months, though some kids are readier earlier or later than that. Signs of potty training readiness include being able to pull their own pants up and down, being able to keep a diaper dry for at least two hours, and showing interest in and being able to communicate about using the toilet. But, even if your kid is exhibiting every single sign that it's go-time, that still doesn't mean you won't end up with a big puddle of pee on the living room floor.

Potty training is not an exact science, and there's more than one correct way to do it. For some parents, it's enough to simply stage a "naked weekend," during which kids run around without pants and underwear on (at home, of course) until they figure out how to pee in the right place. Others rely on books, like Oh Crap! Potty Training! or Three-Day Potty Training. And, for some, it takes months and even years for their kids to ace toilet training 100 percent.

In a later comment on her Facebook post, McLoughlin confessed that her daughter has had zero accidents ... because she's been waiting until her mom puts a diaper on her, and then peeing in it and demanding that her mom immediately change it. Like I said, it's not an exact science. The most comforting thing any potty training parent can remember is that it won't last forever -- oh, and apparently they should also invest in a shit ton of puppy pads.