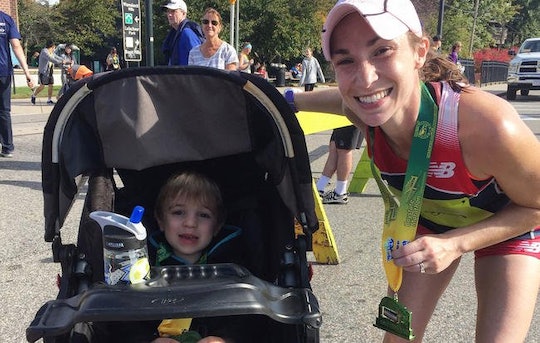 This Mom Broke Records Running A Marathon With Her Son In A Stroller, What Did You Do Today?

I have a confession to make: I love to see nothing more than parents shattering expectations. I can't help but jump for joy when a mom or dad decides to defy the misplaced ideals hoisted upon them. That's why I'm completely in love with this mom who ran a marathon with a stroller and crushed a world record. How cool is that?

According to Runner's World, Dianna Chivakos ran the Baystate Marathon & Half Marathon in Lowell, Massachusetts on Sunday while pushing her 3-year-old son, Evan, in his BOB Revolution jogging stroller. Chivakos and Evan completed the 26.2-mile course in a little over three hours and ten minutes. The Massachusetts mom shattered the Guinness World Record for running a marathon while pushing a stroller by seven minutes, Runner's World reported Thursday.

Of course, Chivakos is basking in the spotlight for her record-breaking feat. But the 34-year-old runner told Runner's World that her son, Evan, was the real star during Sunday's marathon. The preschooler was wide awake through the run, and would get high-fives and encouragement from other marathoners.

I am incredibly lucky. He was a champ. I run with him every day. He's very used to it now — it's not something that only happens once in awhile.

So who's record did Chivakos beat? That would be Jessica Bruce of Bristol, England. In 2015, Bruce had completed the Abingdon Marathon in a little over three hours and 17 minutes with her 7-month-old son Daniel in two, according to BBC News. Her run that year earned her the Guinness World Record title of fastest marathon while pushing a stroller.

Although Bruce no longer holds that record, thanks for Chivakos, the mother of two children did claim a new Guinness World Record this week for the fastest marathon while pushing a double jogging stroller, BBC News reported. She completed this year's Abdingdon Marathon in three hours, 22 minutes, and five seconds, with Daniel and his six-month-old sister Emilia along for the ride. Bruce was the 272nd out of 751 runners to finish the course, according to BBC News.

Bruce told the outlet that her run was relatively smooth, with no emergency stops along the way. She said of the marathon, according to BBC News,

It's a long time in the seat [for the children] but there's so much going on and they absolutely love it. We got them up at five o'clock and poor Daniel was sleeping before the race even started, so they slept for the majority of it.

Both Chivakos and Bruce are shattering more than world records, though. For me, their record-breaking runs also smash expectations of what it means to be a mother and how parents should exist in the world.

I have only been a mother for a little over two years, but over that time, I have had to jump through hoops just to fit into someone's ideal. As a parent, you're supposed to keep your children out of your professional or recreational endeavors. Breastfeeding and want to attend a feminist writing conference? Expect to be shut out. Want to join an adult book club but need to bring your kid along sometimes? Don't count of being welcomed.

Yet, in my experience, when you pursue your pastimes outside of the confines of parenthood, you're condemned for not be a mother first and foremost. Or, if you do insist in including your child in your hobbies, you're considered a bad parent for not putting their needs first. So the fact that Chivakos was able to do something for herself, crush a world record, and bring her kid along for the ride is just mind-blowing and awesome to me.