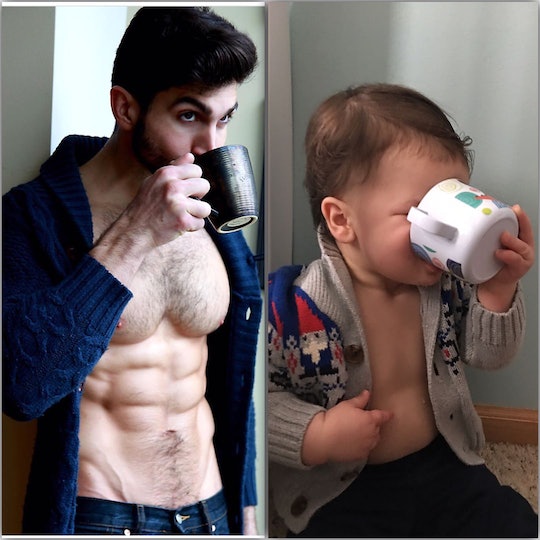 This Mom Recreated Her Brother's Modeling Photos With Her Baby, & They Are So Damn Funny

Recreating photos, whether it's grown-up siblings duplicating baby pics or parents imitating their kids' duck faces, will always be funny. But now there's a clear winner in the copycat genre, because this woman recreated her model brother's photos with her baby as the subject, and it's equal parts hilarious and adorable. Katina Behm started her comedy project by accident, and now it's grown into an Instagram account with more than 40,000 followers in just 7 months. If you're into shirtless dudes, cute toddlers, or good-natured older sibling teasing, this account's got something to keep you entertained.

Behm told the Huffington Post that she initially got the idea for the photos when she was having trouble wrestling her 18-month-old son, Augie, into his shirt. "The image of him with the shirt undone and his bare chest exposed made me laugh because he looked like he belonged on the cover of a romance novel. I took a picture and then realized I bet my brother Aris has a picture just like this on his Instagram page." That would be model Aristotle Polites, and sure enough, he'd posed for photographer Royce Bugarin wearing a similarly-colored scarf. After sending a "Who wore it better" comparison to her family, she realized she had a hit on her hands.

The shots call attention to sometimes-absurd posing of fashion models (how is it cold enough for a scarf, but too hot for a shirt, dude?) while also proving that anything is better with a cute baby involved. And Polites isn't bothered by his older sister's teasing; he often reposts Behm's creations and asks his followers to vote on who looks better. Unsurprisingly, his nephew always wins.

Behm shares a new post once a week, and said that her 88-year-old grandmother looks forward to receiving a preview by email every Sunday. "She always comments on how handsome Aris is but Augie always wins in her eyes," Behm told HuffPost.

If you're wondering how Behm manages to convince Augie to pose for all those glamour shots, it's actually a breeze. She creates a few at a time, and once, after a long hiatus, Augie was thrilled when he realized that it was time to get back to work. "The moment I propped him up against the nursery wall where a lot are taken he got all excited because he remembered that we take pictures like that sometimes." Looks like someone might follow his uncle into the modeling business!

I'm sorry, but those chubby little legs will always win, hands down.

How is it that someone who isn't even old enough to use the potty can take direction in order to lift up his shirt in just the right spot? This kid is clearly a natural.

Nice job on the Blue Steel, buddy, but your little nephew is totally nailing Magnum.

He even knows how to smize! I've been trying to figure that out for years, but the best I can manage gives off the impression that I have a gross secret I'm about to tell you.

Look at that smirk! He's totally in on the joke.

OK, I'm actually starting to feel bad for Polites at this point, because next to Augie, he just looks silly. He's lucky they're not closer in age, or he'd have some serious competition for gigs.

And he even manages to make each look his own. "Captain America? He's alright. I just prefer my superheroes to be a little tougher, I guess, but you do you."

This child is amazing, and he deserves all the cookies. My condolences to Polites for getting totally owned by a baby.

Follow babyandthebody on Instagram for a new post every Monday to get your week off to a good start. I can hardly wait for the next one.