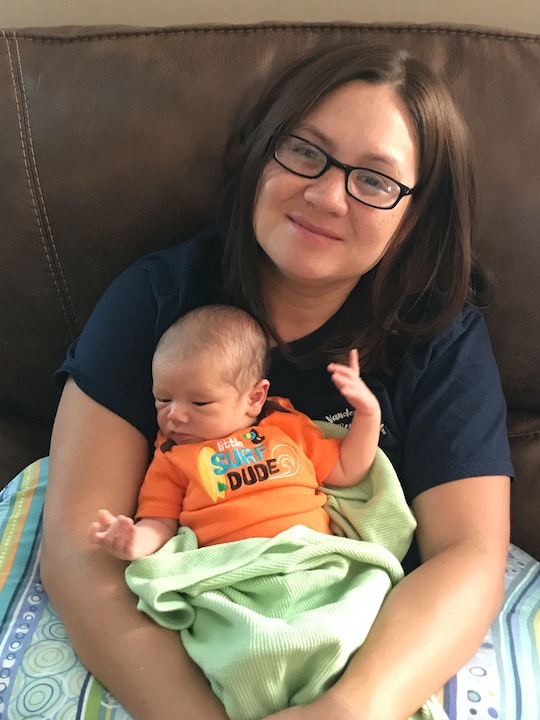 This Mom Running For Office Gave Birth On The Campaign Trail, Because She's That Badass

While voter turnout for the 2018 midterms is already historic, a general sense of apathy concerning the act of voting is still present. From people claiming they're "too busy" to vote, to some believing their vote won't matter or facing barriers to voting (like purged voting rolls), not everyone is excited, or even willing, to exercise their constitutional right to cast their ballot on Nov. 6. Nikki Foster, a mother of two and Democratic candidate for state representative in Ohio's 54th District, doesn't want to hear it, though. A former Air Force Pilot, Foster answered her country's call again when she decided to run for office... at the same time she found out she was pregnant with her second son. And her message is simple: If she can be politically active while growing another human being inside her body, you can vote.

"Sitting on the sideline is not an option," Foster tells Romper via phone. "I think we learned that when we watched Hillary [Clinton] run [for president in 2016]. Maybe there were people who stayed home that day because polls showed she was doing so well. Or maybe it was just general apathy — people who could have been knocking doors and volunteering didn't because they thought she had so much money and support that it was a no-brainer. But there's no time like the present. It's about time we start being at the table instead of on the menu."

Foster was raised by two first-generation Americans — her mother was born in the Netherlands and her father is from the Philippines — and, as a result, was raised to appreciate American democracy and the opportunities it afforded her. After attending the Air Force Academy at 17, obtaining her degree in political science, and serving her country for 12 years as an active-duty pilot, she hasn't forgotten her upbringing or desire to continue to remain politically engaged. She also understands, first hand, how difficult it can be to balance duty to country and duty to family. But it can be done, she says, and it's time more people become engaged and follow suit.

"When my oldest son, Wyatt, was 18 months old, they sent me to Afghanistan, so my husband was a single dad for almost a year," Foster says. "I deployed again to the Middle East in 2014 and my son had his fourth birthday when I was gone, so I missed his second birthday and his fourth birthday. As an Air Force pilot and as mother I was always torn between duty to country and duty to family, but you can make those two work if you work with your support network."

And Foster leaned heavily on that support network when she decided to run for office in 2018 after seeing a need for leaders who would represent her and families like hers. "It was something I always wanted to do and I was running out of reasons not to," Foster says. "When you're raised to learn how to serve your country and your community, and you see a void of the type of leaders you want to see, you step up to be that leader." And when petitions for Foster's candidacy were filed, she found out she was pregnant.

My son was born Sept. 17, and I started doing events again when my son was 2 or 3 weeks old.

"It was all this happy coincidence, because we put off having a second to finish out my Air Force flying career," Foster says. "It was very demanding to fly airplanes and have children. So when [my candidacy and my pregnancy collided] we were committed to both as a family."

Of course, Foster isn't the only mom who heard her country calling her to run for office. Two hundred and thirty four women are running for the House in the midterm elections, reports CNN: 182 Democrats and 52 Republicans. Almost 600 women in total are running for the House, the Senate, and governorships, according to The Center for American Women and Politics (CAWP), many of whom are moms.

"I'm running for office in both Butler and Warren County for Ohio State Representative," Foster says, "and in Butler Country there are only women on the Democratic ticket— and we're talking Congress, four different State Representative, State Senate, and Country Commissioner. It's not just happening with me and my candidacy."

That's not to say running for office the same time you're gestating is easy. Foster admits it was a challenge, but it was one that inspired her and her supporters. As a 37-year-old, Foster decided to keep her pregnancy quiet early on, as there was an increased risk for pregnancy complications. But eventually, of course, supporters caught on. And it was their enthusiasm that pushed her to continue serving her community as a candidate for office.

"I had so many suburban moms that were stepping up to the plate to get involved and were excited about my candidacy," Foster says. "But when they found out I was pregnant they were even more excited and more involved. A lot of them were saying, 'If she can do it, I can do it, too. If Nikki can devote a few hours of her time every day, then I can do it and I can walk with her, march with her in a parade, and knock on doors with her.' That was the mentality of a lot of my supporters, because they knew I couldn't do it all by myself."

We’ve seen that there are a lot of issues that’ve come up — health care, education — and the ones that are going to be able to solve it are people who are solving it in their homes every single day.

It was the support of Foster's husband, campaign manager, and community that allowed her to continue her candidacy after she gave birth to her son, Henry. "My son was born Sept. 17, and I started doing events again when my son was 2 or 3 weeks old," she says. "Because I had my husband at home with me and my mother-in-law helping, I could step away for an hour or two and still make it work."

That same support made it all the more clear why Foster needed to run for office, and why more women and mothers need to be in positions of political power. Not every mom has the support network Foster relied on during her pregnancy and as the mom of a newborn: The United States is the only industrialized nation without mandatory paid family leave, and 25 percent of moms return to work less than two weeks after giving birth.

"We’ve seen that there are a lot of issues that’ve come up — health care, education — and the ones that are going to be able to solve it are people who are solving it in their homes every single day," Foster says. "And that's what mothers and wives are doing."

How do families do that if they're making the median wage, or average wage, or poverty wages? If we're not fighting for them, who is?

Foster's son's health condition was also another moment in which her candidacy and need to run for office was reinvigorated and solidified. During her pregnancy Foster found out her son had a heart condition, and she endured numerous tests throughout gestation. After he was born, Henry spent five days in the Children's Hospital at the Cardiac ICU, an ordeal that placed Foster shoulder-to-shoulder with other mothers facing vital health care decisions.

"We saw so many families there that haven’t gone home," Foster says. There was a 6-month-old sitting next to us, and a 3-year-old getting a pace maker put in. Fortunately for us, Henry’s condition got better when he was born. But hearing those stories right in the middle of my campaign was impactful. I looked at my husband and asked, 'How do families do that if they're making the median wage, or average wage, or poverty wages?' If we're not fighting for them, who is?"

That wake up call of sorts is one that Foster wants every would-be voter to consider before the 2018 midterm election. Health care is on the ballot, and while Republicans are now promising to protect pre-existing conditions, their numerous attempts to repeal and replace the Affordable Care Act, that would have weakened or stripped protections for pre-existing conditions, says otherwise. Currently, a federal judge in Texas is preparing to rule on a court challenge to the Affordable Care Act, brought on by Republicans in 20 states according to The New York Times, that could allow the court to eliminate the pre-existing health condition provision.

"Even though we were already in the race, it just reminded us that these problems can become insurmountable for some families if they don’t have advocates," Foster says. "And that just solidified why I am a Democrat: We’re fighting for families. We’re fighting to help them make it by, or even thrive if they’re given the support they need."

Foster wants more people to join that fight, which is why she's urging everyone to vote on Nov. 6. Because just like her supporters said and have shown through their own actions: if she can do it, so can you.