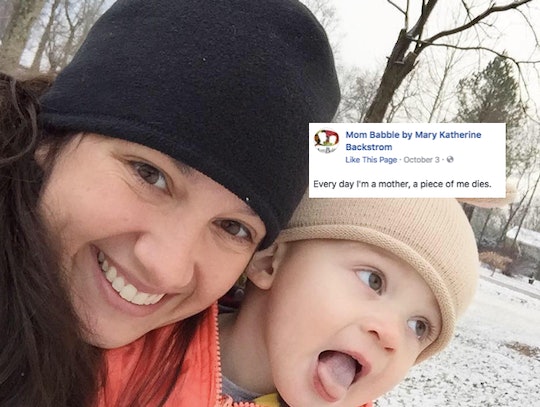 A lot changes once you have a child. There's less sleep to be had, more messes to be cleaned, and new priorities to be considered. And it likely comes as no shock to parents that you also change once kids are in the picture. Touching on just that, in a viral post, this mom explained that a piece of her "dies" every day since she had her child, but not in the way that you might think. Rather she, as many parents do, found that she had become a stronger and better person since her son came into the world.

Mom and blogger Mary Katherine Backstrom experienced a profound change in herself since becoming a mother and took to her blog's Facebook page to express it. In her now-viral post, she explained that "Every day [she's] a mother, a piece of [her] dies." She sets the stage for the first bit of herself that has been lost by detailing what sounds like everyday parenting frustration:

My son is in his high chair and I’m cleaning the floor and dishes. His arm magically transforms into a windshield wiper against the tray. Waffle and oranges fly across the room. Rising up inside of me is a piece of my heart that is angry and impatient. And then I catch my son’s eyes — bright and bubbling with laughter — and that angry little piece of me dies.

And just like that — poof! — her anger has left her. As she goes on, readers learn that the same goes for her laziness on early mornings when her little "nugget" needs his mommy time. Backstrom shared that these new changes to her body sometimes haunt her, but the low self-esteem is surpassed by the realization that she has achieved something incredible:

When I’m trying on clothes in Target’s family dressing room, my son’s legs swinging happily from the cart, nothing fits right, even though I’ve lost the baby weight. A piece of me whispers, “Before the baby, you would have looked awesome in that dress...” And then I remember that skinnier, more fashionable me. Whose dreams and hopes centered around the possibility of a life with children. And that bratty, self-deprecating piece of me dies.

Being a parent, in this case a mother, becomes intrinsically tied with one's personality. As Backstrom put it, it is two-fold:

Motherhood has such a strange dichotomy. It is life-giving and exhausting. It constantly exercises my faith, tests my patience, and stretches my heart. But, as a result, my faith and patience are stronger. My heart is bigger. And although sometimes I still reach the end of my rope, my rope is getting longer.

She told Romper that this was her first post as a blogger and mom, and a message that she felt many new moms could relate to:

I was a new mom, in the trenches, and I kept wondering how it was that I could simultaneously feel that a pieces of me were dying while others were coming to life. I think it's a chrysalis of sorts, becoming a mom. Certain things have to die off to make room for beautiful changes. Doesn't make it easy.

Backstrom is far from the only mother who has experienced a change in herself since having children. In fact, a 2015 study on the changing identities of mothers found that children impact a range of personality qualities in a woman, according to Taylor & Francis Group. Researchers found that after the initial shock phase of bringing home a newborn, women come to actually incorporate their children into their idea of themselves. Additionally, they discovered that some mothers see parenthood as intensifying the personality and identity that they have always had. Children don't take away parts of their mothers, but rather they bolster and strengthen them.

The message behind this post is particularly poignant to mothers who may feel as though they have lost themselves in their role as a parent. Many moms forget to think about their own desires, interests, and needs in favor of those of their children. This is a common trend, but it does not have to be a permanent change. According to HuffPost, by prioritizing self-care and occasional alone time, women can regain that part of themselves that they may feel they have lost.

Backstrom ends her post with an affirmation of the good these little "deaths" do for her every day and an expressional of her gratefulness:

It’s true that every day I’m a mother, a little piece of me dies. But I will not mourn these losses. My child is making me a better person every day. And then the piece of me that doubts I’m doing this “mom thing” right... it dies, too. And I’m left with gratitude. And a floor covered in waffle bits.

Although your children may change you, let Backstrom's words serve as a reminder that this change may be a good thing. And for anyone struggling to find themselves under the banner of "mom," don't give up. You are still full, whole, and wonderful.