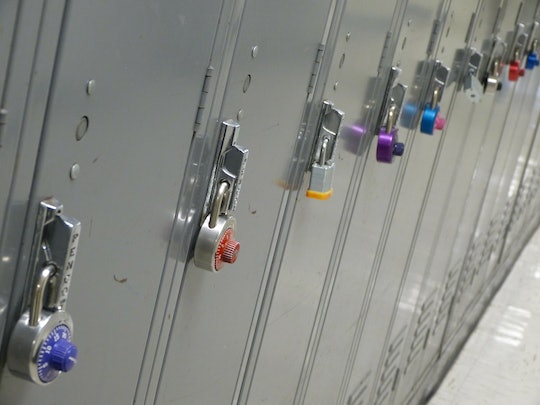 This Mom Says A School "Embarrassed" Her Daughter For Wearing Leggings

Last week, Kimberly Jones turned to Facebook after she said her daughter was “embarrassed” and “harassed” at a Kansas middle school. But what did young Bella do to deserve the alleged ridicule of her peers, her teachers, and other school officials? Well, according to Jones's Facebook post, the 11-year-old wore a tunic and leggings, and the length of said tunic — coupled with leggings — violated the school’s dress code policy. Romper reached out to Lansing Middle School for comment but, at the time of publication, no response had been received.

In the now viral post, Jones explained what she believes happened: Bella was sent to the nurse’s office by a “school official” at Lansing Middle School for a dress code violation. Once there, the nurse measured the young girl’s tunic. After deciding Bella’s shirt was too short, the nurse gave Bella a pair of gray sweatpants and informed her she would have to wear the pants over her leggings, according to Jones.

B got a dress code violation...today. She texted me all upset sobbing that they told her not to call me and that she had to wear borrowed sweatpants all day. Their policy is that they are not allowed to change. She was begging to move because they embarrassed and harassed her. Why? Because apparently 13 year old boys (she's 11 in 6th grade) can't control themselves...because her shirt was too short. In what world is it acceptable to call out and embarrass a child?

And while, to some, this scenario may not appear “embarrassing,” in an interview with TODAY, Jones explained how damaging the experience had been to her daughter:

[After receiving Bella’s text] I left work and I ran right over there and asked them to pull her. She was sobbing. We're a military family and we just moved here. One of the big heartbreakers for me was that literally all day and the day before she was so excited about school. And then to hear your daughter say, 'Can I please move?' It was hard.

According to TODAY, Lansing superintendent Darrel Stufflebeam admitted in an email that the dress code policy was not clear enough:

I apologize and have taken steps to ensure our website remains updated.

And shortly after the incident occurred, the dress code was changed to reflect the leggings ban: leggings are "not considered suitable school wear.”

As for the Joneses, the pair is working to fight LMS's dress code. Bella and one of her friends have created a petition, and, as Bella explained to TODAY, they are hoping they can make a difference: "People are saying that I wasn't telling the truth and that I knew this was a rule — well, it was also once a rule in this country that women couldn't vote! That doesn't mean we give up on a good fight."