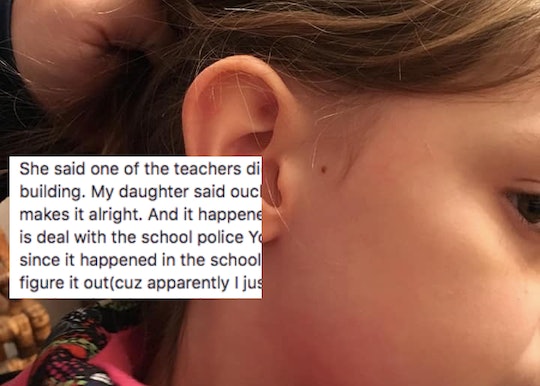 Ready for one of the strangest parenting stories of the month? On Facebook just last week, one mom said a teacher allegedly pierced her daughter's ears at school without permission — and she's now understandably outraged. Pennsylvania mom Amanda Jones shared her story on social media after the alleged incident, and it's since been shared widely by confused parents everywhere.

According to Jones, her 7-year-old daughter, Karli, had previously had her ears pierced when she was 3 years old, but Jones let them close after a week. "The holes have been closed for a long time," Jones wrote in the comments on her Facebook post. "I have tried and failed to put a set of earrings through."

So what happened? According to Jones' original post, she says that Karli came home one day with re-pierced ears after school last week, and told her mother that her teacher did it. The teacher allegedly saw the dents from previous piercings in Karli's ears and simply put earrings through the dents — earrings that Jones claims weren't even Karli's.

Furious, Jones went to the school's police to report the incident and shared the story online. "Why would you continue, and why would you even put earrings in even if a kid said they wanted them without contacting a parent?" Jones wrote on Facebook.

Romper's request for comment from the York City School District and the York County Police Department regarding the alleged incident was not immediately returned.

Jones wrote in her post that she tried to file a report with police about the alleged incident, but since it reportedly took place on school grounds, she was only able to talk to school police. School police then took the earrings involved as evidence, as Jones shared on Facebook. According to CafeMom, Jones also took Karli to the doctor for an official report and spoke to both the school and authorities about the incident.

According to Jones, Karli's teacher admitted to re-piercing Karli's ears. The girl's teacher allegedly "kept saying stupid sh— like she can go such and such time without having earrings in and put them in and the hole never closed," as Jones wrote on Facebook.

The day after Jones posted her story, she added an update letting people know that she was now waiting on proceedings. It seems like the story isn't over yet, but in the meantime, plenty of people have shared her post and commented with their own share of indignation.

To be clear, people shouldn't even be re-piercing their own ears without the help of a professional. "Any time you puncture the skin, you open up the opportunity for infection," Wendy Sue Swanson, a pediatrician at Seattle Children's Hospital, told Parents in 2012. You want to make sure children are ready for a piercing and excited about getting it done, and that the technician you use for the procedure is using sterile, safe equipment. (Actually, that's sound advice for pretty much anyone who plans on getting a piercing, not just children.)

Piercings are also a hugely personal choice for parents, and many moms and dads have strong opinions about if and when their children should have their ears pierced. For someone else to make that choice for a parent, regardless of whether a child has requested it or not, is simply not OK.

If the allegations are true, they're also pretty worrisome. Teachers spend a lot of time around students and it's great to have them grow close — but a big decision (such as allegedly re-piercing a 7-year-old's ears) should always be left between the child and their parents.