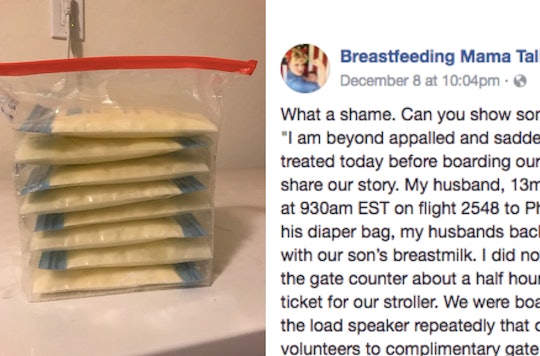 Traveling with young children in tow is famously not fun, but when that child is exclusively breastfed, there is even more stress involved. Despite there being official TSA rules in place for dealing with breast milk on flights, many parents still face opposition from airport employees. Case in point, this mom said she was charged $150 to bring her breast milk on a plane or she had to leave it behind.

Mom Sarah Salow sent her experience to Breastfeeding Mama Talk's Facebook page: While flying home from Boston to Phoenix with American Airlines with her husband and 13-month-old son Lucas, Salow claims she was told by a gate attendant that the flight was full and her cooler bag containing frozen breast milk would not pass for a personal item, therefore she would have to pay a $150 fee to check it or leave it behind. She wrote:

I am beyond appalled and saddened by how myself and my family were treated today. We traveled with our son’s stroller, his diaper bag, my husband's backpack and a small 11x13x14 soft cooler with our son’s breast milk. I did not have a personal item.

Salow told Cafe Mom that Lucas was born with a lip and tongue tie that made him unable to feed straight from the breast. She had been pumping her breast milk and feeding it to him via bottle:

This was our first trip traveling since I have stopped pumping. I pumped enough milk in our first year to keep Lucas on BM until he is two years old,. Since I have always traveled with my pump and fresh milk, this was a new adventure for us.

In her post, she explained that they checked the stroller prior to their flight and expected no issue with their other small items. However, she says an airline employee told her at the gate that an additional item would have to be checked. Her diaper bag and her husband's backpack were to be personal items, but the small cooler bag was going to cost her — despite the fact that the airline was offering complimentary checked bags just minutes prior. Perhaps most shockingly, Salow claimed that the attendant told her that her son's breast milk was "not necessary" and she didn't need it.

Other passengers in line who overheard the interaction offered to carry the cooler for her and other employees tried to get the cooler on as well, but the Salow claims the attendant stuck to her guns. A tearful Salow ended up leaving her bag behind, while the same attendant told her that she was "welcome for saving [the family] $150," and that they "created the situation for [themselves.]" Really?

Adding salt to the wound, when Salow and her family boarded the plane, they not only discovered that the plane wasn't full, but that there was overhead space available above their own seats. In her post, Salow stated that she has traveled with breast milk before with no issue, and she called American Airlines ahead of time to discuss the cooler and how to best bring it along with them. "The gentleman I spoke with that day was so warm and encouraging. He actually suggested that I carry the milk with us to ensure its safety," she wrote in her post.

The TSA specifies on its travel guidelines that moms are welcome to bring "reasonable amounts" of breast milk as a carry-on item, as Salow and her family tried to do. Unfortunately, airport employees don't always follow these guidelines, often because they're unaware of them. Even Alyssa Milano was forced to throw out her breast milk before a flight, proving that it can happen to anyone. There are precautions that families can take, such as calling ahead as Salow did, but they don't always work out.

Preparation is best, but if you still face opposition, I would recommend contacting the airline in question to voice your complaints. Salow spoke with an American Airlines customer service representative who agrees that the family was treated unfairly and is seeking compensation.

Leslie Scott, American Airlines Senior Manager of Global Communications told Romper that the airline is actively working with the employees involved in the incident to gain a better understanding of what happen. American Airlines is also working to ensure that no other family has to experience what Salow and her family did, saying:

The customer should have been allowed to fly with the breast milk, and we apologize that a mistake was made in this case. We are going to clarify our policies with our team members to specifically call out breast milk (the policy already lists a breast pump bag as an exception) to make sure that this does not happen again.

Salow tells Romper that she hoped her story would help help other moms in the future to avoid similar situations, because moms "have to empower each other and stand up for each other," saying:

I decided to share our story because I’ve heard of these stories before and I swore I’d never find myself in this situation but it really can happen to anyone. If I can save the next mom in line, that is justice enough for me.

Losing something as valuable as breast milk over failure to comply with regulations is unacceptable. Hopefully, with enough attention and vocalized outrage, issues like these will soon be a thing of the past.