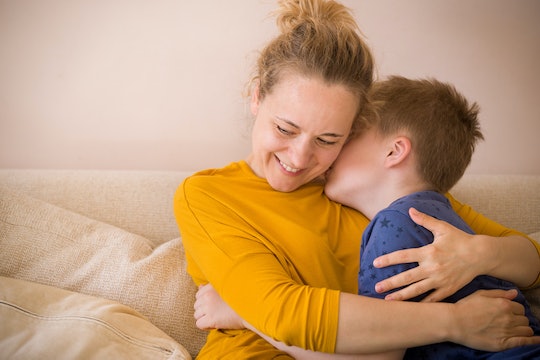 This Mom Breastfeeds Her 7-Year-Old Son Who Has Autism, & She's Not Here For Your Commentary

Motherhood in general can be fraught with judgment, and it seems like everyone has an opinion on what should and shouldn't be considered acceptable. But the truth is that pretty much all parents are just trying to do right by their kids — and for some, that might mean adopting some rather unorthodox strategies. This mom says breastfeeding helps her 7-year-old son who has autism, for example, and given how touchy a subject breastfeeding can already be, it's not exactly surprising that her comments haven't been entirely well-received. But the point of her story, it seems, is not whether breastfeeding a 7-year-old child should or shouldn't be acceptable. It's that, regardless of anyone else's thoughts on the matter, it's working out well for her and her son. And it's unfair to judge her for that — especially if you've never experienced the added challenges often involved with raising a child who has autism.

Australian mom-of-five, Lisa Bridger, told Buzzfeed that, for over 20 years, she has tandem-fed her children, who range in age from 22 to 4. Like many moms, Bridger said she decided to let her children decide when they were ready to wean, but in the case of of her 7-year-old son, Chase, and his 4-year-old brother, Phoenix, that day has yet to come. One reason? The boys are both on the autism spectrum, and it turns out that breastfeeding has become a valuable tool to help with some aspects of the developmental disorder.

For one, Bridger — who runs the Occupy Breastfeeding Facebook page — told News.com.au that, without breastfeeding, she'd likely have had to put Chase on medication. She explained that breastfeeding "calms and grounds" her son — in part because he's able to get melatonin from her breastmilk since he's unable to swallow melatonin supplements on his own. And Bridger told Buzzfeed that breastfeeding has also been about "a lot more than just the milk," noting, "It's bonding, comfort, and security for the child."

These days, Bridger says Chase only mostly breastfeeds at night before bed, but since she's following her children's lead, she'll feed them in public if they need it. For the most part, Bridger told News.com.au that, in person, people rarely comment on it. But online, it's a much different story: Bridger said that "anyone feeding a child beyond a year gets accused of child abuse, pornography, [and] damaging their health."

But is that true? In the United States, the concept of breastfeeding beyond infancy is one that might seem a bit strange: according to Psychology Today, only about 13 percent of mothers breastfeed exclusively for the first six months of their babies' lives, while the average length of time mothers breastfeed is about 17 weeks. That's much shorter than the World Health Organization's recommendation, which is that babies should be breastfed exclusively for a year, and then breastfed "along with appropriate complementary foods up to two years of age or beyond." In fact, the American Academy of Family Physicians has stated that the estimated "natural weaning age for humans" is actually between "two and seven years." So while breastfeeding a child well past infancy might not be the cultural norm, it doesn't seem at all fair to assume that it's harmful.

What's more though, is that Bridger isn't the only mom to find that breastfeeding was a huge asset to helping children who are on the spectrum. In a 2014 essay for Kveller, Chana Maya Ritter wrote about being a young, first-time mom to her daughter, Chava, and how breastfeeding helped her ease some of the effects of what she eventually learned was Chava's autism.

Ritter wrote that Chava struggled constantly with things that, for most kids, are just normal parts of their daily routines — play dates, eating lunch, going to the park — and that breastfeeding "was the calm and serenity that [her] daughter craved constantly." Ritter said that when her daughter "screeched in the bathtub," she would climb in too and breastfeed her so that she could actually wash her hair properly. And when, at 3-years-old, Chava needed glasses but refused to wear them? Ritter told her she could only breastfeed if she agreed to put them on:

She refused adamantly, until realizing that I meant business! For the first few days, she only wore her glasses when she was nursing. Then it became routine. Chava would ask to nurse, put on her glasses, and forget about them. For the very first time, she began to see the world clearly.

In time, Chava weaned, and eventually was given a formal diagnosis. And like Bridger, Ritter realized that, while making the decision to continue breastfeeding her daughter wasn't always easy, it was definitely what her daughter needed at the time.

Of course, Chase and Phoenix won't be breastfeeding forever — and Bridger did say she looks forward to the day when she can "get her body back," according to News.com.au. But for now, it sounds like the arrangement is what's best for them. And it doesn't really seem like it's anybody else's place to judge.