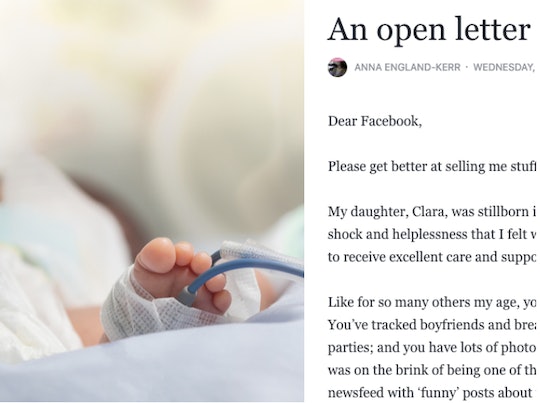 It's the kind of devastating loss no excited parent-to-be ever wants to even think about, let alone experience, but at 38 weeks along, British first-time parents Anna England-Kerr and Stephen Boyle, learned that their daughter, Clara, had died in the womb, according to the BBC. After enduring the heartbreaking experience of delivering their baby girl, they took to social media to inform their friends and family about what had happened, and there, they were also able to connect to a community of others who had experienced a similar loss. But according to England-Kerr, she says Facebook "taunted her" after her stillbirth by continuing to show baby-related ads long after her daughter's death, even though she'd taken a variety of steps to stop them from popping up.

Earlier this month, England-Kerr penned an open letter to Facebook to explain her frustration and sadness over the continued parenting-themed advertisements she was still seeing, months after her loss. She wrote that, like most millennials, she'd long used Facebook as a way to document and share all kinds of life updates and milestones, and her pregnancy was no different.

Since Facebook ads are targeted according to what you post and appear interested in, England-Kerr said in her open letter she received lots of ads for baby and pregnancy-related items, many of which she was definitely interested in. But after losing Clara, the ads became another painful reminder of what had happened, and though she used ad blockers, sent feedback to the site, and changed her privacy and advertising settings, England-Kerr wrote that it felt like the ads "were unintentionally taunting [her] with reminders of what [she had] lost."

In a recent blog post, England-Kerr emphasized that she didn't actually have an issue with the ads in general, but just that they kept coming even when she'd tried everything she could to make them stop. She wrote, "I'm happy with [Facebook] using my data as long as [they] don't use it to make me cry," and in an interview with BBC host Victoria Derbyshire Thursday, she explained that she took all the steps she could think of, including changing her Facebook ad settings to "hide parenting ads," along with "anything that could possibly be related to babies, parenting, family, home ... literally unclicking everything that I could find."

England-Kerr said she also tried to individually report ads she saw as "not relevant," but when nothing seemed to affect the kinds of ads she was being shown, she grew increasingly frustrated. In her interview with the BBC, England-Kerr explained:

You have to understand, when you've just lost your child, you are exhausted. There is nothing that I have found that is more exhausting than grief, and you're trying to piece together your world again. And Facebook is important, because you can share, you can find people who are going through similar things like you ... [But] after a couple of months [of still receiving the ads] I'd had enough.

After publicly voicing her frustration, England-Kerr wrote on her blog that she'd received a phone call from Facebook's European vice-president, Nicola Mendelsohn, whom she said "expressed her condolences," and "acknowledged that constantly seeing baby related ads was a problem and said that they would make it a priority to fix."

England-Kerr called Facebook's response "a step in the right direction," and told Romper that "it’s wonderful to think that this change will take place in Clara’s name and that she’ll have left such a big mark on the world." Yet, as much as it may be a win for her and other bereaved parents, England-Kerr explained that it's also indicative that there seems to be a lack of options in general for those who being inadvertently targeted by upsetting or triggering ads. As she told Romper:

It’s sad to see how many people have come forward because they were affected in the same way that I was. In an age where online advertisers have increasing amounts of information about us, I believe they have a duty to think of how their ads will affect us. When building advertising models, designers should think of effective ways for people to say that they don’t want to see certain topics. When people go to the trouble of opting out of a topic be it parenting or alcohol, advertisers should take note.

England-Kerr told Romper that the her message to Facebook has generated an "overwhelming response," and it seems to be one that has inspired her to continue to take action. She wrote on her blog that she intends to reach out to other companies "whose ads kept on popping up on [her] feed," and that she also wants to get in touch with Amazon, in hopes that the site will also allow bereaved parents to opt out of receiving ads and notifications for items linked to parenting or babies.

In addition to her advocacy though, she and her husband are also raising funds to support the hospital where Clara was delivered. The couple has set up a crowdfunding campaign for the Lewisham and Greenwich NHS Trust Charitable Fund's "Quiet Little Room" at Lewisham Hospital, a private room on the maternity ward for parents to deliver their stillborn babies, giving them a much-needed private space "away from the happy noises of other parents who have just welcomed healthy babies."

Though, for most of us, internet advertising might seem like an annoyance, England-Kerr's story highlights the fact that, for bereaved parents, seeing what can feel like an endless barrage of baby-related ads is incredibly painful. And while that pain may not be intentional, by speaking up, she's helping to support all of the social media users who deserve to have the chance to turn off the upsetting reminder of what they've just experienced.