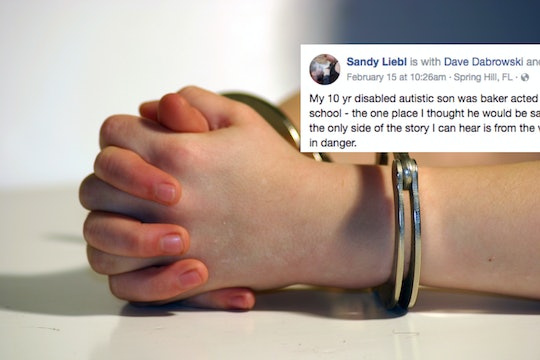 This Mom Says Her Autistic Son Was Handcuffed At School, & The Story Is Horrifying

There's been a lot of talk about alleged misconduct by law enforcement hitting the mainstream media in recent years. But there's one population we aren't talking about enough when it comes to how police and other law enforcement are trained to deal with civilians — people with disabilities. In a recent incident, one mom alleges her son with autism was arrested and mistreated by police, and it's terrifying, but especially so for those of us with family members and friends who are on the autism spectrum.

Update: Denise M. Moloney, the community/media relations manager and public information officer for the Hernando County Sheriff’s Office, tells Romper via phone that four educators were trying to use “calming techniques” to calm Liebl's son and were unable to do so. She says that during this incident, the child was biting himself and attempting to bite an educator. Educators then called a deputy to the school, and after observing the situation, the deputy determined that, “for his own safety and the safety of others,” the child needed to be removed under the Baker Act.

When asked how officers determine that a child needs to be detained under the Baker Act during an incident, Moloney says, “We can’t predict what’s going to happen,” and that officers make that determination if the child seems like they could be a danger to themselves or others. It’s “not to be taken lightly,” she says.

Sandy Liebl said on Facebook that her 10-year-old son was "Baker acted" last month at school. For reference, the Baker Act is a law in Florida that lets families and loved ones "provide emergency mental health services and temporary detention for people who are impaired because of their mental illness," according to University of Florida Health. Many human rights and disability rights activists feel that the Baker Act does more harm than good, and Liebl even said in her Facebook post that there is a "lack of education" when it comes to kids with disabilities and the Baker Act that has to be addressed.

Authorities handcuffed Liebl's son and put him in a police car in the incident, Liebl wrote about on Facebook, as a result of the Baker Act. The Act does allow kids to be taken from their school to a psychiatric hospital for 72 hours in Florida, according to Rosa Prieto, a Spokesperson for the Citizens Commission on Human Rights (CCHR). Thanks to that rule, Liebl, her son, and their family say they went through what would be a true nightmare for every person who has disabilities and for their loved ones.

After her son was taken from his school, Liebl wrote that he was transported to a facility that is not certified in dealing with pediatric patients. She said she was threatened with arrest when she tried to check on the wellbeing of her child, and was denied the ability to see him. He was then sent to another facility, and when Liebl was finally able to check on her son there, he allegedly had "bruises, scratches, handcuff marks and bite marks on him." She tells Romper:

When I saw my son for the first time immediately I wanted to hug him and tell him everything will be okay but the first thing that caught my eye was all the bruises and marks all over my son's body.

Liebl said in her Facebook post that after her son was released, she spoke with the resource officer at her son's school, as well as "his Lieutenant, his Sargent, his Major and eventually the Sheriff" over the following 3 weeks. "Instead of being met with empathy or compassion," she wrote, "we were met with judgement, ignorance and a complete lack of respect."

Liebl tells Romper that her son has been sent home frequently by the school in recent months as she and her husband have worked closely with her son's doctors and with adjusting his medications. "It became so ridiculous that my child spent more time at home than he did in school," she said.

But this time was different. Liebl told Romper the school claimed that before her son was removed, he was "misbehaving, throwing things in the classroom," but she told Romper that he has a paraprofessional who is supposed to be with him at all times, so she doesn't know how that's possible.

Staff at Winding Waters K-8 directed Romper to speak to the public information officer at the school, Karen Jordan, about the incident. Jordan tells Romper in an email:

The law enforcement officer makes the determination as to whether a BakerAct is necessary. School staff do not make that decision.

Recently, a 7-year-old at Miami’s Coral Way K-8 Center was reportedly handcuffed, then transported in a police car and taken to a hospital for an involuntary psychiatric exam after an incident in school, according to The Miami Herald. And state data shows that the Baker Act is used on students in Miami-Dade’s public, private, and charter schools more than three times every school day, the publication reported. That's just one district in the state — imagine what the numbers are like statewide.

We have been threatened by the administration in this school with getting the police involved and Baker Acting our child for several weeks now prior to the actual incident.

But involuntary psychiatric evaluation shouldn't be used as a threat to try to make kids behave or to keep families from going public with alleged abuse. That sort of evaluation by psychiatric professionals should only be used in extreme cases, and at least in the case in Miami, a doctor said the child involved "was not a threat to himself or to anyone else," The Miami Herald reported. Under the Baker Act, people who require its use "have often lost the power of self-control, and they are likely to inflict harm to themselves or others," which a professional said was not the case in the incident with Liebl's son.

Every kid has the right to an education, and every child with disabilities is "entitled to receive special services and reasonable accommodations through the public schools" according to federal laws including the Individuals with Disabilities Education Act (IDEA), Section 504 of the Rehabilitation Act of 1973, and The Americans with Disabilities Act (ADA) (1990)," according to HG.org, a legal resources site.

In the case of Liebl's son, he was not getting the education he deserved, and instead of working with the family, the school allegedly had him removed and put into a psych hold over an incident in the classroom. And Liebl wrote that when the Center for Autistic Related Disease — an advocacy and therapy organization — offered to come and educate the school resource officers on working with children like her son, the sheriff allegedly told her and her husband “My officers don't have time for more education. Our job is to remove the disturbance.” Maloney of the sheriff's office tells Romper this allegation is "absolutely false," and that officers are "constantly in a state of training." Liebl stands by her allegation, telling Romper, "No disabled child should be treated like my son was. It only takes a little education to understand that disabled children need to be treated with patience and compassion instead of ignorance."

To some degree, every parent worries about their child being mistreated. But parents of kids with disabilities are on a whole other level of worrying about their kid being mistreated. As someone with a sibling who has autism, I can relate, to some degree, to the fear Liebl must have felt over the wellbeing of her child when he was detained at school. It was the one place he should have been safe, and instead, he and his family went through a nightmare ordeal that is unfortunately all too common.

Update: This story has been updated with a comment from the Hernando County Sheriff's Office.