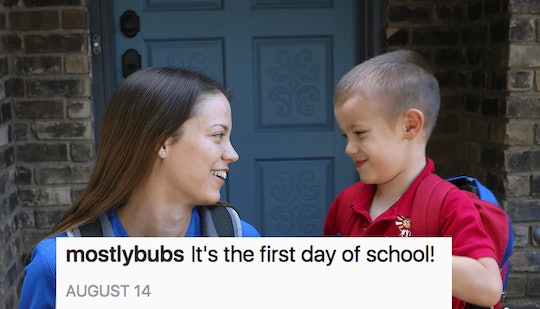 Back to school season is officially upon thousands of parents — but what about when mom is headed to school, too? This mom and son back to school photo captured an adorable — and often overlooked — moment shared by Katie Tucker and her 4-year-old son Edric as they both headed off for school on the same day. Katie's husband Scott shared the sweet photo on his Instagram on Aug. 14, as Edric was on his way to his first day of his final year of preschool while Katie was on her way to her first day of dental school, according to The Huffington Post.

In the photo Katie, dressed in blue scrubs, holds a chalkboard with her son and they're both wearing backpacks for their big day. The chalkboard reads: "First Day of Pre-K 4" under Edric, while it says "First Day of 22nd grade" under Katie. Scott shared on Reddit that his wife made a "career pivot" to dentistry after earning her bachelor's degree in zoology and her master's in behavioral analysis.

The first day of school can be daunting for any kid, no matter how big they are — and the Tuckers' back to school photo brings awareness to the issues that parents who go back to school face when raising school-aged kids of their own.

While it may not seem that common for parents to head back to school, the numbers say otherwise. According to The Institute for Women's Policy Research (IWPR), more than 4.8 million parents are also college students as of 2014. Of those, more than 3.4 million are student mothers while more than 1.4 million are student fathers. Interestingly enough, there are more married fathers returning to school than single dads, while the bulk of student mothers in post-secondary education are single moms.

With many families having two parents that work, parents who work and are going back to school at least part time are carrying a triple load — and they need extra support, especially financially. For many moms heading back to school, they might be tempted to apply for bogus "Obama's Moms Return to School" grants — and these grants can still be found online even though Obama isn't president any more. In a ProPublica investigation, former Robert Shireman deputy undersecretary at the U.S. Department of Education said, "Moms are eligible for federal financial aid generally — Pell Grants, student loans and other aid — but nothing specific to moms or single moms."

But it's not just about financial aid, either: Child care is a huge issue for parents who return to school. Barbara Gault, IWPR's Executive Director told The Atlantic that schools have been slow to provide student parents with childcare options. "It’s taking a long time for institutions of higher education to undergo a culture shift that reflects the changing demographics, and to begin to view themselves as organizations that are family-friendly — not just for faculty, but for students," Gault said.

For the Tucker family, their commitment to education is serious: Katie defended her master's thesis when she was 38 weeks pregnant with her son. As the school year gets underway, there are bound to be more challenges ahead, but the family seems to be taking this new dynamic of both parent and child back in school in stride.