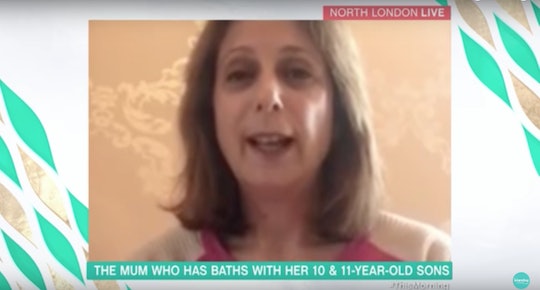 This Mom Still Bathes With Her 11-Year-Old Son, & Parents Have *Feelings* About It

When you're the parent of a young child, it honestly makes a ton of sense to multitask by bathing with your kid. It certainly might not be the most relaxing experience to share a bathtub with a squirmy toddler, but let's face it, the early years of parenthood aren't usually full of long, relaxing baths as it is, and the two-birds-with-one-stone approach is majorly efficient. But at what point does co-bathing become a no-no? While it might seem extreme to some parents, this mom still bathes with her 11-year-old son, and on Tuesday she defended her stance on the British talk show This Morning, arguing that continuing to co-bathe with older kids is perfectly natural. That didn't exactly go over particularly well with parents on social media though, and they definitely made their opinions known.

Writer and mom-of-two Lauren Libbert spoke to This Morning hosts Holly Willoughby and Phillip Schofield via video chat during the episode, according to The Sun, and told them that she usually has a bath with her 10- and 11-year-old sons "maybe once a week." But while that might sound a bit unusual to some, Libbert doesn't see anything wrong with it: she said, "this isn't a big issue in our house at all, it's something we've been doing for years."

Though Willoughby pointed out that there are many parents who might find the idea "unnatural," Libbert said she thought it was actually quite the opposite, and spoke about her own experience as one of five siblings who found that bath time was when she was able to have quality one-on-one time with her own mother. She explained,

I grew up in a household where I used to put my feet in the bath when my mom was having a bath. She was a mom of five children, she was really busy, she was always moving around, and the only place that she was still and relaxed and where I could catch her for a chat was in the bath ... I don't think I even noticed she was naked, it was just a lovely, peaceful, happy place.

As much as Libbert's perspective makes sense and seems entirely sincere, it also seems like an understatement to say that there are many who disagree. While few would likely fault Libbert for enjoying some quality time with her sons, the fact that that quality time happens when they're all naked is a big problem for some parents — particularly given that her sons aren't little boys anymore.

Some Twitter users felt that parents bathing with older children was just straight up inappropriate:

While others argued that the conversation would be viewed much differently if it had been a dad bathing with his 11-year-old, instead of a mom:

Nudity issues aside though, some also took issue with the fact that Libbert thought it was OK to broadcast the fact that she bathes with her sons, given that they're old enough to be teased about it at school:

For some parents, the notion of letting their kids see them naked — either in the bath, or otherwise — is either totally natural and fine, or completely inappropriate. But if you happen to fall somewhere in the middle of that debate, you might be wondering what experts have to say. The most common answer? It depends.

In general, there doesn't seem to be one right answer to the question, and according to Canadian psychologist and sex therapist Jason Jones, that means it mostly comes down to the comfort level of both the parent and child. Jones told Global News that "there’s no sexuality that comes from just looking at or seeing someone nude," and that if parents feel like it's no big deal, that's likely what their children will think too. But parents should also be following their children's cues: if it looks like they want privacy or are uncomfortable, it's time to cover up.

When it comes to parenting, it seems that there is no shortage of strong opinions, and nudity is certainly no exception. And it definitely doesn't help that many of us as parents are still grappling with the own messages we learned about our bodies as children, while trying to figure out what we want our kids to learn. Ultimately, Libbert's experience bathing with her sons seems entirely positive and like just another way they spend quality time together, and it seems unfair to automatically assume there is something sexual or wrong about it simply because her children are boys, or because they are a bit older. But it also makes sense that her decision to proudly proclaim her stance on national television would make a lot of people feel uncomfortable.

As with most things parenting-related though, there are many ways to approach the issue, and we're all just making the best choices we can based on our own experiences. If co-bathing works for you and your family, then that's great, and if it doesn't, that's fine too. But even if your kids are down with seeing you naked, it might not be a bad idea to double check that they're also OK with you letting the world know about it.